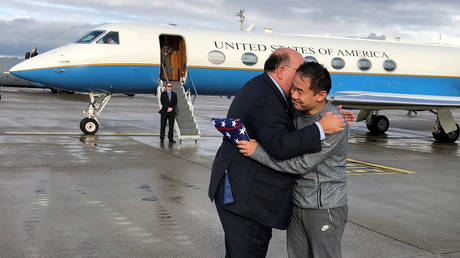 In a reprieve from the usual bellicose rhetoric, President Donald Trump thanked the leaders of Iran for swapping an American prisoner with a detained Iranian scientist. Senior officials, however, told a different story.

Princeton scholar Xiyue Wang left Iran for the US on Saturday morning, while Iranian Scientist Massoud Soleimani returned to Tehran from America. Wang had been in Iranian custody since 2016 and was serving a ten-year term on espionage charges, while Soleimani was arrested in Chicago last year for sanctions violations and was awaiting trial.

The prisoner exchange came after weeks of negotiations, a senior US official told reporters on Saturday. President Trump later thanked Iran for “a very fair negotiation,” and suggested that the swap was proof “we can make a deal together.”

Taken during the Obama Administration (despite $150 Billion gift), returned during the Trump Administration. Thank you to Iran on a very fair negotiation. See, we can make a deal together! https://t.co/rZaY9p8xzV

Relations between Washington and Tehran have declined sharply since Trump withdrew from the Joint Comprehensive Plan of Action (JCPOA, or Iran Deal) last year. The deal had offered Iran some sanctions relief in exchange for a halt to its nuclear program, yet Washington reapplied these sanctions in the months following the withdrawal. (RT)