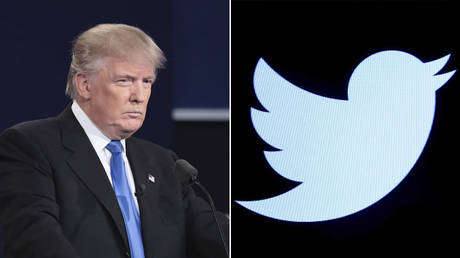 US President Donald Trump and Attorney General William Barr have gone on the warpath against Big Tech, unveiling proposed reforms to the firms’ Section 230 liability that would curtail their ability to effect political censorship.

Singling out Twitter’s censorship of “conservative views,” the president warned the major tech platforms that the days of their exercising unrestrained political influence were numbered. He was speaking on Wednesday at a roundtable discussion with Attorney General William Barr, nine of his Republican state counterparts, and Senator Josh Hawley (R-Missouri), one of Congress’ most vocal critics of Big Tech.

President @realDonaldTrump on social media bias: At the urging of the Radical Left, these social media platforms have become intolerant of diverse political views pic.twitter.com/h5nc3pWaMW

At the urging of the radical Left, these platforms have become intolerant of diverse political views and abusive toward their own users… as abusive as you could possibly be in some cases.

In case it wasn’t clear the president was referring to his own treatment by Twitter (and to a lesser extent Facebook), Trump singled the microblogging platform out for “routinely restrict[ing] posts expressing conservative views, even from a President of the United States” while supposedly allowing “vile antisemitic hate and even death threats” from Iranian Supreme Leader Ali Khamenei.

The proposed reforms would force tech companies to make their terms of service both clearly-defined and publicly available and prevent them from selectively enforcing them – i.e. using one rule for political enemies and another for allies. Platforms would be forbidden from using “deceptive or pretextual grounds” to block access to content and must notify users in a timely fashion if their content is restricted or removed. Users must be granted a “meaningful opportunity to respond” to any content removal, unless the offending material “relates to terrorism or other criminal activity” or would “risk imminent harm to others.”

The bill exempts from liability protection any company that “acted purposefully with the conscious object to promote, solicit, or facilitate material or activity” it knew would violate federal law. Platforms are also forbidden from blocking access to material hosted on another platform, unless they have “an objectively reasonable belief” that content is “obscene, lewd, lascivious, filthy, excessively violent, promoting terrorism or violent extremism, harassing, promoting self-harm, or unlawful.” Merely deeming content “objectionable,” however, is no longer protected under the liability shield. (RT)