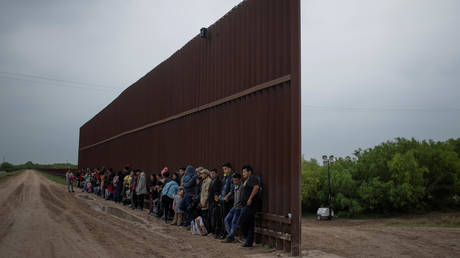 Asylum-seeking migrants from Central America line-up along the border wall as they wait to surrender to the US border patrol ©  April 2, 2019. REUTERS/Adrees Latif/File Photo

President Donald Trump has once again scaled back how many asylum seekers are allowed to resettle in the US, a decision that has highlighted a sharp policy difference with Democratic rival Joe Biden ahead of the election.

The US leader capped the number of refugees that will be welcomed into the country at 15,000, believed to be a record low since the start of Washington’s refugee program. In a memo published on Tuesday night, Trump said that the new limit for Fiscal Year 2021, which began in October, includes 6,000 unused refugee slots from last year that were left vacant due to the coronavirus pandemic.

In total, 5,000 places are reserved for refugees facing religious persecution, 4,000 for refugees from Iraq who aided the United States military in the region, and 1,000 for refugees from El Salvador, Guatemala and Honduras. The remaining 5,000 slots are open to the rest of refugee applicants. Due to alleged terrorism risks, asylum seekers from Somalia, Syria and Yemen are barred from participating in the program, except in special circumstances.

In his order, Trump said that only states and localities which have “clearly expressing their willingness to receive refugees” should be asked to house asylum seekers. He also stressed that communities which choose to take in refugees should be prepared to “support their successful integration into American society” and ensure a smooth transition into the labor force. (RT)