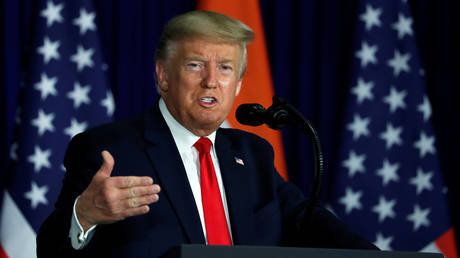 President Donald Trump has called reports that Russia is interfering with the 2020 election “highly exaggerated,” and blamed the rumor on House Intelligence Committee Chairman Adam Schiff.

The specter of ‘Russian interference’ raised its head again last week, when the Washington Post ran an article claiming the Kremlin is interfering in the upcoming presidential election on behalf of Vermont Senator Bernie Sanders, with the ultimate goal of getting Trump re-elected. The story provided no specifics on what form the supposed interference took, but claimed that Sanders and Trump had both been briefed on the threat.

“Intelligence never told me,” Trump told reporters on Tuesday at a press conference held during his state visit to India. “What I’m reading,” he continued, is that “they went to see Bernie and they told Bernie.”

Also on rt.com ‘There’s a lot we could learn from Mordor’ – Bernie Sanders slammed for saying not everything was bad under Fidel Castro

While Sanders responded to the story by denying receiving Russian assistance, and warning Russian President Vladimir Putin to “stay out of US elections,” Trump took a different approach. (RT)