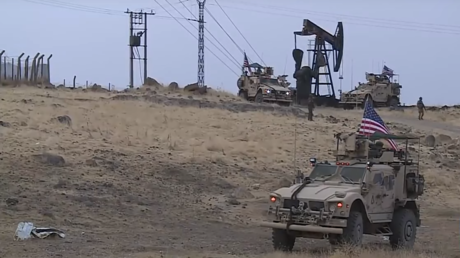 Democratic presidential hopeful Joe Biden, who back in the good old Obama administration days lobbied for the arming of ‘moderate’ rebels in Syria, has slammed Trump for downgrading the US military to an oilfield occupation force.

“Leaving troops behind like [Trump’s] doing now – he says that what he wants to do is we’re going to occupy the oil fields and we’re going to take ‘em…” Biden told the Wall Street Journal. He expressed deep regret that the vacuum, left by the US troop pullback, has disastrously been filled by the legitimate Syrian government, Russia and (probably worst of all) Iran. Oh, and Islamic State terrorists of course.

That’s like a giant 300-foot recruiting poster for ISIS

As if only terrorists would object to the God-given American right to occupy and loot sovereign nations’ natural resources, Biden did not criticize the policy shift per se, but rather raised doubts if President Trump had any coherent foreign policy at all – and lamented yet another US ‘betrayal’ of its allies. (RT)

Lavrentiy Beria is a figure whose name once sparked terror throughout Eastern Europe. As the…