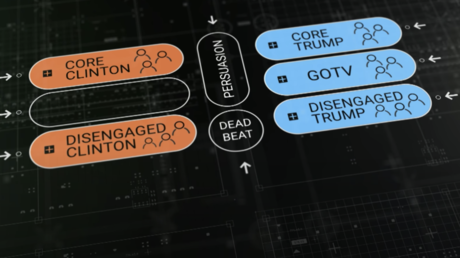 Millions of Americans, disproportionately black, were targeted by algorithmic voter suppression methods deployed by then-candidate Donald Trump’s 2016 campaign to keep them away from the voting booth, a new report claims.

“Project Alamo,” the digital arm of the Trump campaign, amassed a vast hoard of information on nearly 200 million Americans, using the database to target voters in 16 battleground states, according to an investigation by the UK’s Channel 4 News.Voters were divided into eight “audiences” for the purpose of targeted Facebook ads, with one category – titled “Deterrence” – consisting of people the campaign “hope don’t show up to vote.” Details of the alleged algorithmic voter suppression campaign were revealed after an unnamed entity allegedly leaked over 5,000 files, amounting to nearly five terabytes of data, from the project to Channel 4.

Their analysis showed black voters were significantly overrepresented in the “Deterrence” category, sometimes by as much as 300 percent: in Wisconsin, where they make up just 5.4 percent of the population, they made up 17 percent of “Deterrence”-classed voters. A total of 3.5 million black Americans were put in this category in the leaked files. Along with Asian, Hispanic, and ‘other’ groups, they reportedly made up 54 percent of the group to be targeted with vote-discouraging propaganda.

Read more:   Covid-19: virus resurgence in Victoria with another 75 cases

Also on rt.com Florida AG urges FBI to probe Mike Bloomberg’s pro-Biden effort to pay fines of 32,000 felons so they can vote

“Deterrence” voters were seen as those leaning toward Trump’s Democratic rival Hillary Clinton but not guaranteed to support her, according to the report. While they were unlikely to be persuaded to vote for Trump, they might be persuaded to stay home – at least, Project Alamo apparently thought so.

The meticulous digital campaign was reportedly crafted by a team from UK data-mining firm Cambridge Analytica alongside a team from the Republican National Committee. While Cambridge Analytica is no more, two members of the team are reportedly working on Trump’s 2020 reelection campaign. The data-mining firm infamously harvested information from millions of Facebook users without their knowledge or consent using innocuous-looking personality quizzes, giving them a comprehensive profile of the electorate.

Channel 4’s investigation appeared to frame Project Alamo as a campaign of racially-motivated voter suppression, noting that black turnout fell in 2016 for the first time and pointing to a Cambridge Analytica memo admitting to spending $55,000 in just the state of Georgia to bombard black voters with a video of Clinton saying black children were “super predators” who had to be “brought to heel.” However, the outlet was unable to dig up most of the ads allegedly used to deter black voters, many of which were reportedly “dark posts” that disappeared when Facebook was no longer paid for them.

Nor could Channel 4 provide proof that it was the Trump campaign’s Facebook ads that convinced “Deterrence” voters to stay home – as opposed to voters’ own memories of Clinton’s “super predators” remark, her husband’s mass incarceration of black men for low-level offenses, the Clinton Foundation’s mishandling of billions of dollars in donations intended for Haitian earthquake victims, or even Clinton’s failure to campaign in certain key swing states. Several of the 2016 non-voters they spoke to reported they rarely came out for elections, and the possibility that black voters might have felt less driven to vote for the profoundly problematic Clinton than to re-elect Barack Obama, the first black US president, in 2012 went unmentioned.

Read more:   President Ilham Aliyev: Azerbaijan's territorial integrity has never been and will never be a subject of negotiations

Brad Parscale, who served as digital director for the Trump campaign in 2016, insisted in an earlier interview with PBS Frontline that he was “nearly 100 percent sure” they “did not run any campaigns that targeted even African Americans.” (RT)

Pakistani Ambassador: “UN Security Council resolutions are not being implemented on this conflict either”

Pakistani Embassy in Azerbaijan has hosted the event dedicated to the day of Kashmir’s occupation.…

Supplying all kinds of weapons to Armenia free of charge is ok, while Azerbaijan’s buying…

As reported earlier, a group of adherents of the Armenian ‘Dashnaktsutyun’ party organized an unauthorized…

MoD: Information about shelling of a border post in Armenia is false