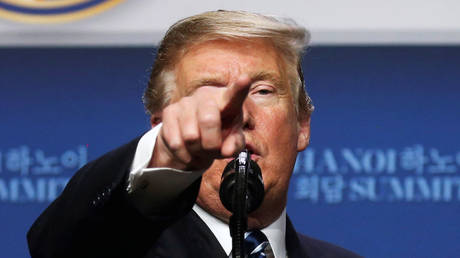 President Donald Trump has scolded the media for “misrepresenting” his words on Otto Warmbier, a US student who died shortly after his release from a North Korean jail, saying that he holds still the reclusive nation responsible.

Trump faced massive backlash after he told a press conference in Hanoi, Vietnam, on Thursday, that he takes North Korean leader Kim Jong-un “on his word” that he had no prior knowledge about the Warmbier ordeal before the US negotiated the student’s return.

“I don’t think that the top leadership knew about it,” Trump said, noting Kim gained nothing from Warmbier’s death. “I don’t believe that he would have allowed that to happen. Just wasn’t to his advantage to allow that to happen.”

Also on rt.com Trump-Kim summit failure no surprise as only nukes deter US regime change in N. Korea – Gabbard

Mainstream media immediately jumped on the remark, accusing Trump of “absolving” the “brutal dictator” at the expense of an American citizen.

Warmbier’s parents have also poured fuel on the fire raging online, blaming the North Korean leader for their son’s death and seemingly reprimanding Trump for his reluctance to do the same.

In a series of tweets on Friday, Trump blamed the media for putting him in the crosshairs.

….for Otto’s mistreatment and death. Most important, Otto Warmbier will not have died in vain. Otto and his family have become a tremendous symbol of strong passion and strength, which will last for many years into the future. I love Otto and think of him often!

“I never like being misinterpreted, but especially when it comes to Otto Warmbier and his great family,” he tweeted.

“Of course I hold North Korea responsible for Otto’s mistreatment and death,” he added, calling the Warmbier’s family “a tremendous symbol of strong passion and strength.”

“I love Otto and think of him often!” he wrote.

Trump did not point out where exactly the media had got it wrong, and never walked back his defense of Kim. (RT)