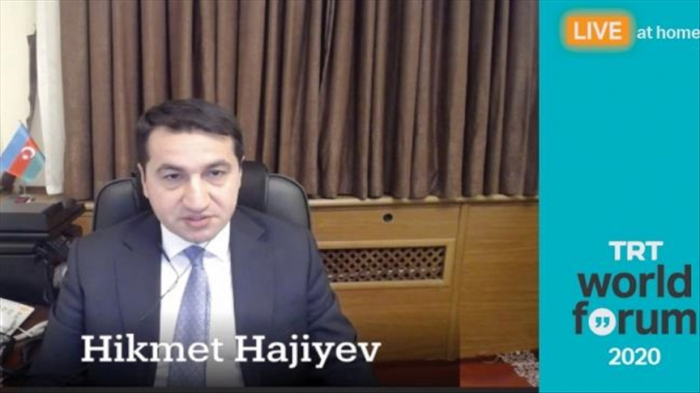 Experts and politicians from Azerbaijan and Russia discussed the situation and developments in the war-hit region of Nagorno-Karabakh on Tuesday at the fourth TRT World Forum 2020, which was held online due to the novel coronavirus pandemic, according to the Turkish media.

Speaking at the roundtable, titled War and Peace: The Fate of the Azerbaijan-Armenia Conflict, Assistant to the Azerbaijani President, Head of the Foreign Policy Department of the Presidential Administration Hikmet Hajiyev, argued that with the conflict on Nagorno-Karabakh now over after weeks of fighting between Baku and Yerevan, Azerbaijan had destroyed the regional security paradigm imposed by Armenia, thus allowing the implementation of the UN Security Council’s resolutions on the matter.

Although the conflict between Armenia and Azerbaijan is over, there still are disagreements between the two countries, said Hajiyev, adding: “Azerbaijan is looking forward to build comprehensive regional security.”

He suggested the need for a “national Marshall Plan” for Azerbaijan to rebuild the areas that had been occupied after buildings and structures there were destroyed in the Armenian withdrawal following a cease-fire on Nov. 10.

“This can be described as a genocide of a city,” Hajiyev said, urging Armenia to respect its neighbors and the integrity of their lands and borders.

Nagorno-Karabakh, also known as Upper Karabakh, is a territory internationally recognized as part of Azerbaijan. But it was under Armenian occupation since the early 1990s.

New clashes in the territory erupted on Sept. 27, and ended with a Russian-brokered truce, which is seen as a victory for Azerbaijan.