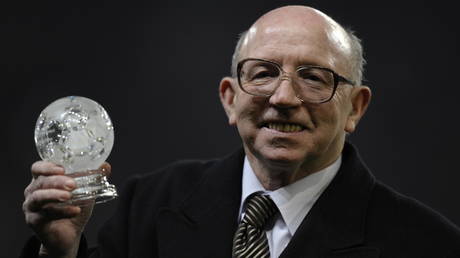 Tributes have poured in for England World Cup-winning legend Nobby Stiles after he died on Friday aged 78 following a lengthy illness.

In a statement, Stiles’ family said: “The Stiles family are sad to announce that Nobby Stiles passed away peacefully today surrounded by his family after a long illness.

“The family kindly ask for privacy at this sad time.”

The midfielder had both prostate cancer and dementia, which was said to be at an advanced stage, and he has become the seventh player from England’s starting lineup in the 1966 FIFA World Cup final to die.

We’re incredibly saddened to learn of the passing of Nobby Stiles, a key member of our @FIFAWorldCup-winning squad, at the age of 78.All of our thoughts are with Nobby’s loved ones. pic.twitter.com/NJygFddX7F

So too did Manchester United, where he spent the bulk of his playing career, along with Red Devils captain Harry Maguire.

We are extremely saddened to learn of the passing of Nobby Stiles MBE.An integral part of our first-ever European Cup-winning side, Nobby was a titan of the club’s history, cherished for his heart and personality on and off the pitch.He will be sorely missed by us all. pic.twitter.com/aT0Mk47cEl

Sir Geoff Hurst, a teammate of Stiles’ during the World Cup, wrote on Twitter: “Hugely sad to hear Nobby has passed away. We were playing together way back for the U17s, U23s, and of course, for England, in fact, it was my first cap when Nobby scored, I think he was wearing No. 9! Great character, and the heart and soul of the team, he will be sorely missed.”

Hugely sad to hear Nobby has passed away. We were playing together way back for the U17s, U23s, and of course, for England, in fact, it was my first cap when Nobby scored, I think he was wearing No. 9! Great character, and the heart and soul of the team, he will be sorely missed. https://t.co/VNfJZTePPd

David Beckham, whom Stiles coached as a youngster at United, paid his own tribute to him on Instagram in a post that was liked by fellow former England captain John Terry.

“So sad to hear the news of Nobby passing today…” he wrote. “I will be forever grateful for the support and passion he showed me and all the other youth team players when we were young kids.

“We were lucky enough to learn from many greats at Manchester United but Nobby was a World Cup winner so it was extra special.

“Thank you for everything Nobby you will be forever in our Memories as a United and England great but more importantly our coach.

“Rest In Peace and our thoughts are with your family and friends.”

Gary Neville, who was also coached by Stiles as he rose through the youth ranks at Old Trafford, said: “You taught us how to fight for everything in that red shirt.”

Rest in Peace Nobby. Thank you for all you did for us. You taught us how to fight for everything in that red shirt . “ Your studs are your best friends out there “ ❤️ pic.twitter.com/njE02x7yDx

Saddened to hear that Nobby Stiles has passed away. Another of our 1966 World Cup winning heroes leaves us. He had a heart that was even bigger than the gap in his teeth. RIP Nobby.

Stiles’ celebratory dance with the Jules Rimet trophy in one hand and his trademark false teeth in the other created one of the most iconic images of the 1966 World Cup.

He had almost been ejected from the tournament after he seriously injured France’s Jacques Simon in the final group game, but after England boss Sir Alf Ramsey threatened to resign over the matter he was allowed to stay.

Stiles went onto prove vital to the Three Lions’ success, with strong performances in the semifinal – in which he kept Portugal legend Eusebio quiet – and the final.

Along with Bobby Charlton, he was one of just two English players to play in and win the World Cup and European Cup finals, and his medals were later bought by United for more than £200,000 in 2010.

Ian Callaghan was also a member of the European Cup and World Cup-winning teams, but he did not play in the final of the latter.

The defensive midfielder spent 14 years at Old Trafford – 11 of those as a senior player – between 1957 and 1971, before he spent two seasons apiece at Middlesbrough and Preston North End, where he retired in 1975.

He took over as manager of Preston two years later. After four years coaching the Lilywhites he joined the Vancouver Whitecaps, before a brief stint at West Bromwich Albion and then a return to United as a youth coach between 1989 and 1993. (RT)