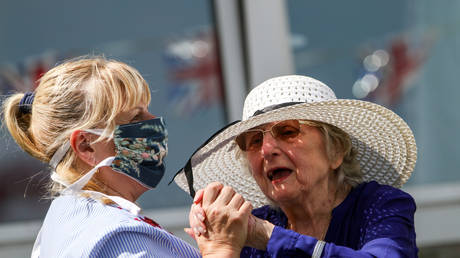 The UK should focus on helping the most vulnerable – including residents in care homes worst affected by Covid-19 – instead of pursuing an “unfeasible” goal of suppressing the virus until a vaccine arrives, top scientists urged.

Authored by Oxford professors Sunetra Gupta and Carl Heneghan, as well as Karol Sikora of the University of Buckingham and Sam Williams of the Economic Insight consultancy, the letter says the “existing policy path is inconsistent with the known risk-profile of Covid-19.” The appeal has been signed by dozens of academics from the UK’s leading educational institutions.

The unstated objective currently appears to be one of suppression of the virus, until such a time that a vaccine can be deployed. This objective is increasingly unfeasible… and is leading to significant harm across all age groups, which likely offsets all benefits.

The letter comes days after Health Secretary Matt Hancock pledged “to do what it takes” in order to fight Covid-19. After the UK recorded close to 4,000 confirmed coronavirus cases on Sunday, the government is considering a “circuit-breaking” period of tightened measures which could be announced later this week, UK media revealed.

Such a move could reportedly involve bringing back restrictions in public spaces for a few weeks, most of which were relaxed throughout May and June. Pubs and restaurants could be mandated to close earlier across the country, but schools and most workplaces would be kept open. Closing some parts of the hospitality industry is also one of the options.

A group of us across medicine, academia and other areas have come together and sent this letter to the PM and his team.Professors Heneghan, Gupta and many others – a wide range of voices as this crisis affects everything.We desperately need a rethink to find a better balance. pic.twitter.com/0jHqta3KYE

According to the authors of the open letter, blanket measures aren’t the way to go. “Instead, more targeted measures that protect the most vulnerable from Covid, whilst not adversely impacting those not at risk, are more supportable,” they wrote. (RT)