Edinburgh lacks authority to order a referendum on whether to part ways with London, the judges decided A Scottish independence supporter with the flag of Scotland outside the Supreme Court in London © AFP / Justin Tallis

The semi-autonomous government of Scotland cannot hold a vote on independence from Britain without the consent of the government in London, the UK Supreme Court decided on Wednesday.

The top court’s President Lord Reed said its five judges had unanimously ruled that the Scottish parliament “does not have the power to legislate for a referendum on Scottish independence.”

The justices agreed with a UK government lawyer, who argued that the power to hold a referendum rests with the British Parliament in London because the issue is “of critical importance to the UK as a whole,” not only Scotland.

Nicola Sturgeon, the leader of the ruling pro-independence Scottish National Party, said she was disappointed by the ruling, but insisted that it only “blocks one route” for Edinburgh towards deciding whether to part ways with London.

“A law that doesn’t allow Scotland to choose our own future without Westminster consent exposes as myth any notion of the UK as a voluntary partnership” and makes the case for independence even stronger, she argued on Twitter. 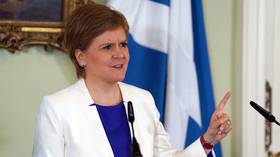 Court to rule on timing of Scottish independence vote

In a speech later in the day, Sturgeon said the SNP was going to hold a special conference in the new year to decide on how the next general election in Scotland can be de facto turned into an independence vote.

The UK government welcomed the decision by the Supreme Court, with its Scottish Secretary Alister Jack advising the authorities in Edinburgh to give up on pursuing independence and address the issues that “matter most” to the Scottish people. “That’s why we are focused on issues like restoring economic stability, getting people the help they need with their energy bills, and supporting our NHS,” he said.

Read more:   Ban vaccine export? We can do the same, French minister says, after Italy stopped AstraZeneca shipment to Australia

Sturgeon has been saying that the SNP was planning to hold another referendum on breaking away from the UK in 2023. But the idea is being vigorously rejected by London, which says it won’t allow such a vote as the country already decided on the issue eight years ago. During the referendum in September 2014, those in Scotland looking to remain part of Britain won by 55% to 45%.

The SNP insists that things changed after the Brexit vote in 2016, in which 62% of the Scottish public spoke in favor of Britain staying in the European Union. Surgeon had earlier said she would seek to rejoin the EU if Scotland becomes independent, but would also work to build equal relations with London. (RT)