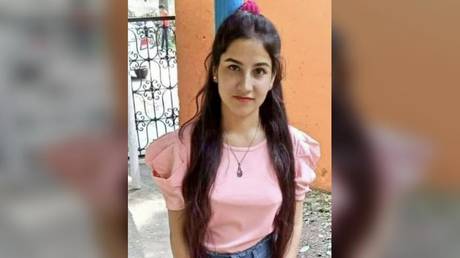 The son of a senior Indian politician is accused of slaying a young employee at a resort hotel he owns for refusing to provide sexual services Ankita Bhandari. © Social media

Indian police on Saturday recovered the body of Ankita Bhandari, a 19-year-old receptionist who went missing earlier this week. The murder has sparked massive public outrage and triggered a political meltdown, after Pulkit Arya, the son of a leading politician with the ruling Bharatiya Janata Party (BJP), was named the main suspect.

Bhandari, who worked at the Vanatara Resort in the city of Rishikesh owned by Arya, went missing earlier this week after a dispute with the management of the establishment. Local police confirmed the victim was being coerced by Arya and two other suspects into providing “special services” to the resort’s guests. According to local media reports, Bhandari complained to her friend that the management demanded that she have sex with the resort’s guests and said she was in “trouble” shortly before her disappearance. “They are trying to turn me into a prostitute,” one of her WhatsApp messages read.

Read more:   Russia has a new secret weapon in its standoff with the West

As the news of the murder spread, the resort was attacked by angry locals, who pelted the building with various projectiles, breaking its windows. The crowd also tried to lynch Arya, as well as the manager and assistant manager of the resort as police took them into custody on Friday. Footage circulating online shows the partially naked, visibly battered suspects inside a police vehicle.

Two accused in Ankita Kandari murder case were thrased by the locals in Yamkeshwar in #Uttarakhand Ankita (19) was missing from a resort since Sept 18. One of the accused Pulkit Arya is the son of #BJP leader pic.twitter.com/2w4jJVfAuU

The resort ended up being partially demolished overnight on order of the local authorities, as it turned out to have been built illegally. The demolition was ordered by the chief minister of the state of Uttarakhand, Pushkar Singh Dhami, who strongly condemned the murder.

“It is unfortunate. Police are working, they have done their work for making the arrests. Strictest punishment would be given for such heinous crimes, whoever be the criminal,” he said.

Illegal construction of resort owned by Pulkit Arya, son of BJP leader who is accused of Ankita Bhandari murd€r case was bulldozed by Uttarakhand BJP Government.BJP proved once again, all criminals will be treated equally.pic.twitter.com/X5yeoQNa1L

The surviving part of the resort ended up torched by locals on Saturday after Bhandari’s body was recovered from a local canal.

Arya and two other suspects have already confessed to the murder, according to police. The resort owner said he had killed the receptionist by pushing her off a cliff into the canal following the dispute last Sunday night.

The BJP has tried to distance itself from the scandal, expelling both the main suspect’s father, party leader Vinod Arya, and his brother Ankit Arya, from the BJP’s ranks. After being ousted from the party, the politician, who had previously served as a state minister, expressed his support for the ongoing investigation.

“The district administration should investigate the matter and if we are wrong, action should be taken accordingly,” he stated. (RT)