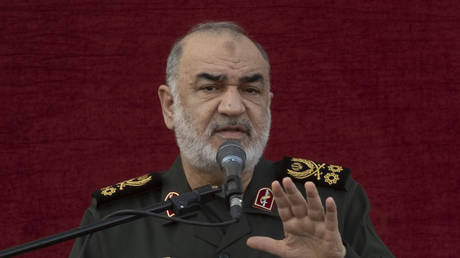 The commander-in-chief of the elite Islamic Revolutionary Guard Corps (IRGC), Hossein Salami, has warned the US, Israel and other foreign nations that any attempts to sow discord in Iran will ultimately backfire and lead to their own demise. The top commander made the remarks in the eastern city of Zahedan on Sunday, as he addressed some 15,000 members of Basij security militia.

“The US, Britain, Israel, Germany, France, and the House of Saud are all trying to provoke tensions in Iran by means of their divisive media outlets. However, the nation is fully vigilant. Enemies have many pipe dreams and are living in delusions,” Salami told the militiamen.

The commander accused Washington and London in particular of seeking to re-establish colonial dominance over Iran, and warned that their attempt to cause a “great sedition and this world war will be turned into a graveyard of the enemies.”

“The United States, which has decimated tens of millions of people in various wars and is the exporter of instruments of torture and weapons of mass destruction, and Britain, which has committed massacres all over the world and has a colonial mindset, are nowadays trying to harm the Iranian nation. They will never succeed, however,” he stressed. 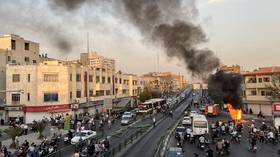 For months now, Iran has seen violent protests that erupted over the death of Mahsa Amini, a 22-year-old woman who was arrested by Iran’s morality police in September for allegedly wearing her hijab “improperly” and died hours later. Amini’s family believes she was beaten to death while in custody, however, Iranian authorities insist that she died of a pre-existing medical condition stemming from surgery on a benign brain tumor she had undergone when she was eight.

Tehran has repeatedly accused foreign adversaries of hijacking and directing the protest, which led to multiple deadly attacks on government facilities in a string of incidents, described by the government as terrorist acts. President Ebrahim Raisi said earlier this month that Washington was trying to destabilize Iran by encouraging unrest in the guise of legitimate protests, taking a page from the playbook used in Libya and Syria, two countries that were plunged into civil wars. (RT)