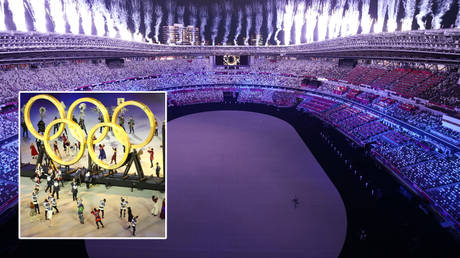 The Tokyo 2020 Olympics have formally begun with one of the most unusual opening ceremonies the Games are ever likely to see, attended by the Emperor of Japan and the first lady of the US at a largely empty Olympic Stadium.

The 32nd edition of the games, which is expected to cost a total of around $16 billion, launched with only around 1,000 invited spectators at the 60,000-capacity Olympic Stadium.

Jill Biden, the wife of new US president Joe Biden, was at the ceremony in her first solo international trip as US first lady, alongside games honorary patron Emperor Naruhito, Queensland premier Annastacia Palaszczuk, other dignitaries and members of the media.

Around 11,000 athletes have descended on Japan for a showpiece that will not allow any fans in as part of measures reluctantly agreed between the International Olympic Committee (IOC) and local and national government officials.

The time has finally arrived. The athletes have overcome many obstacles to reach this moment. Even when things were hard, they never gave up on their dream. Now, the @Tokyo2020#OpeningCeremony begins…#StrongerTogether | #Olympicspic.twitter.com/GpmB5fLqk6

The extraordinary move has been made amid rising Covid-19 cases and a fourth state of emergency being declared in the country, with organizers even facing pressure to cancel the games entirely since the beginning of the pandemic.

The latest polls have shown that more than half of the Japanese public remain against the games, with the opening ceremony, which began with a seed of hope being symbolically sown, designed to create a noticeably more sobering spectacle than the kaleidoscopic carnival with which the Rio 2016 version began.

After fireworks flew over the stadium, a lone woman – a nurse who took a paycut during the pandemic and was forced to work at a smaller facility – was seen running alone on a treadmill.

Apart, but not alone. With the emergence of COVID-19, many athletes had to train for this moment in isolation. But they were always connected by their hope and shared passion. ❤️#StrongerTogether#OpeningCeremonypic.twitter.com/7teAvhljXe

A number of other athletes then joined her, including an individual using a rowing machine as colored dots joined up in an apparent depiction of the connections forged in spite of the isolating theme of the last 18 months.

The emperor and IOC president Thomas Bach were introduced as the lights fell, preceding the entrance of the national flag, surrounded by masked children, healthcare workers and noted former athletes in red and white uniforms.

Japanese pop star Misia, who has released 13 top ten albums in her homeland, appeared in an eye-catchingly colorful dress to perform a poignant rendition of the national anthem, ‘Kimigayo’.

Despite the dark shadow #Tokyo2020 is under, the opening ceremony is just mesmerising. And I absolutely want Misia’s dress! ♥️ pic.twitter.com/WjgGbXhqm0

A dancer in a white robe then performed a tribute to the athletes killed in the Munich massacre, the tragedy that marred the 1972 Games when Palestinian terrorists took nine members of the Israeli team hostage after killing two of them.

Tap-dancer Kazunori Kumagai was joined by woodworkers in front of five towering wooden Olympic rings created from pine and spruce trees planted at the 1964 Games, which were held in Tokyo in 1964.

The group were accompanied by a Japanese work song, ‘Komari Uttar’, before the much-anticipated arrival of each country’s representatives, with two athletes invited to hold each flag this year.

Visuals from the opening ceremony of #TokyoOlympics2020 (Images: AFP) pic.twitter.com/etYsN4gyKW

As is tradition, Greece led the way, with the athletes remaining socially distanced and donning masks in front of the conspicuously unoccupied seats.

They ranged from the unashamedly raucuous Argentina party, who jumped and embraced each other as if celebrating victory as they made their way along the floor, to Austria, Nauru, Iraq and several countries who have never won a medal, including Bolivia and Cambodia.

Some nations had reportedly made a late decision to proceed with their participation in the Games, with Guinea, which has had a rise in Covid-19 cases, among the late confirmations entering the echoing arena.

One of the smallest groups of Canadian athletes ever to walk into an opening ceremony. A pandemic Olympics. But a profound, powerful moment. They’ve endured. They’ve arrived. #TeamCanada is at #Tokyo2020pic.twitter.com/khMpQw9mAX

#Tokyo2020 : Fireworks during the opening ceremony of the #Olympicspic.twitter.com/tM7FvlLrcf

In all, 206 countries are expected to take part – all of them hoping that their ranks will not be blighted by the positive coronavirus tests that have already sent some athletes into isolation or even prevented stars from boarding planes at all.

Eliud Kipchoge, the marathon world record holder due to attempt another astonishing feat of endurance towards the very end of the Games, was among the Kenyan contingent to take the limelight.

Russia appeared as the Russian Olympic Committee, wearing a neutral flag and black-and-red uniform as part of a ruling by the World Anti-Doping Agency that will also affect the country’s team at the 2020 World Cup in Qatar.

Russia’s sizeable count of 335 proud athletes – many of whom have strong hopes of winning medals – is 15 more than the country took to Rio five years ago.

Basketball player Sue Bird, who is the fiancee of US Women’s team icon Megan Rapinoe, and baseball ace Eddy Alvarez represented the USA, shortly before wrestler Yui Susaki and NBA forward Rui Hachimura oversaw the honors for the hosts.

Once all the countries had received their early moment of glory, the words ‘Faster, Higher, Stronger, Together’ were unveiled on stage, together with more pyrotechnics firing high above the curved roof.

Our superheroes are finally here @Olympics#Tokyo2020#OpeningCeremony! 👋 🤩 Look at those vibrant colours of their attire inspired by the famous Hang Tuah accompanying our national flag, Jalur Gemilang 🇲🇾#KitaJagaKita#unifiedMalaysians#DemiMalaysiapic.twitter.com/1xDKqIZ3an

The earth made out of drones ! Very impressive and poetic ! #Olympics#Tokyo2020pic.twitter.com/Bkgfo9w8GM

Arguably the quirkiest part of the ceremony played out after numerous athletes had read the Olympic oath, with a procession of actors dressed in cartoonish outfits forming the Olympic emblem with a set of giant building blocks.

In perhaps the most impressive artistic part of the show, thousands of drones duly replicated the design of the earth in the night sky, giving way to a version of John Lennon’s ‘Imagine’ performed by well-known singers from every continent.

Politician and former speed skater and track cyclist Seiko Hashimoto gave an opening speech. “The whole world has experienced immense challenges with Covid-19,” she said, praising medical workers around the world, the population and local and national governments of Japan and the athletes, to whom she offered her “heartfelt gratitude”.

HOW IS NO ONE ELSE LOSING THEIR MIND OVER HOW COOL THIS IS?!?!? #OpeningCeremony#Olympicspic.twitter.com/Cqkv3wytUW

“The world is waiting for you,” she told competitors. “After more than half a century, the Games have returned to Tokyo.

“Now we will do everything in our power to make these Games a source of pride for generations to come.

“Hopes have been connected one by one by many hands, and we are now in a position to welcome this day. The whole world has faced immense challenges with Covid-19.

“I would like to express my gratitude and respect to all essential workers, including those in medical services and others around the world who have shown such determination in overcoming these challenges.

“I would also like to offer my thanks to the people of Japan for hosting the Games, as well as to the International Olympic Committee, the Government of Japan, and the Tokyo Metropolitan Government and other organisations for working so hard to make them happen.

“Ten years ago, when we decided to bid for the Olympic Games, many people in Japan faced profound difficulties, and were in mourning following the massive Great East Japan earthquake and tsunami.

“Many of the affected communities were losing the will to pick themselves up and move forward.

“People from all over the world extended a helping hand, encouraging us to move forward together.

“Now, ten years later, we can show you the extent of Japan’s recovery. We are most grateful to all of you.”

Former fencing champions Bach said the ceremony was “very different” but a moment of “hope” that should be “cherished”.

#StrongerTogether 💪🏻Athletes are seen with the Olympic motto during the #Tokyo2020#OpeningCeremony. Marko Djurica/Reuters#TokyoOlympics#Olympicshttps://t.co/Vtt4GMAjRYpic.twitter.com/FC6Xhdhi0B

“Finally, we are all here together,” he announced. “This is the unifying power of sport. This gives all of us hope for our further journey together.

“We can only be here because of you: our gracious hosts, the Japanese people, to whom we would like to express all of our appreciation and express.

“What is true for the perseverance of the Japanese is also true for you, my fellow Olympic athletes. You had to face great challenges on your Olympic journey. Like all of us, you were living with great uncertainty during the pandemic… we did not even know whether this competition would take place at all.

A beautiful moment: @RefugeesOlympic walking into the stadium. They may not have a national flag of their own, but their rights are equal to all.Thank you Thomas Bach and @FilippoGrandipic.twitter.com/AaoXGhtpHv

IOC President Thomas Bach: “The pandemic forced us apart. … This separation made this time so dark. But today, wherever in the world you may be, we are united in sharing this moment together. The Olympic flame makes this light shine brighter for all of us.”

“You inspired us, the IOC and the entire athletic community, to fight like you and for you, and make this moment possible. Our Olympic community learned that we can only face the big challenges of our time if we stand together.

“The big lesson that we learned is that we need more solidarity within societies and among societies. This solidarity fuels our ambition to make the world a better place through sport.

“Only through this solidarity can we be here together tonight. Solidarity also reflects our 3,000-year-old commitment to peace. United in all of our diversity, we become greater than the sum of our parts.” (RT)