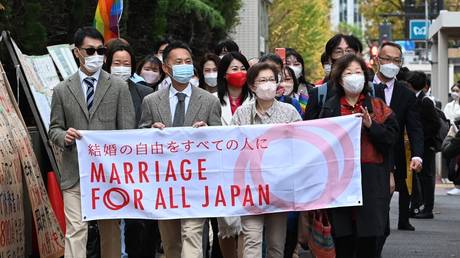 Plaintiffs and their supporters head to the Tokyo District Court in Tokyo on November 30, 2022. ©  Kazuhiro NOGI / AFP

The existing ban on marrying gay and lesbian couples is constitutional, the ruling says Plaintiffs and their supporters head to the Tokyo District Court in Tokyo on November 30, 2022. © Kazuhiro NOGI / AFP

A court in Tokyo has dismissed a case, in which plaintiffs argued that denying same-sex couples the right to get married was unconstitutional. In two similar cases in other Japanese cities, justices came to conflicting conclusions on the issue, but all three courts denied claims of compensation.

The campaign to challenge the Japanese government for an alleged violation of the constitution was launched in 2019. Thirteen same-sex couples filed lawsuits in Tokyo, Osaka, Sapporo and Nagoya, claiming compensation for the psychological suffering allegedly caused by the Japanese government’s refusal to marry them.

The Wednesday ruling by the Tokyo District Court rejected the argument by eight plaintiffs that the Japanese legislation, which only recognizes marriages between a man and a woman, violates the constitutional equality provisions. The basic law’s article on freedom of marriage requires matrimony to be based “on the mutual consent of both sexes,” the court noted.

A similar decision was taken by the Osaka District Court in June. However, the March 2021 ruling by the Sapporo District Court agreed with some of the arguments submitted to it. It stated that the lack of a mechanism granting same-sex couples the legal benefits that married couples enjoy – such as inheritance rights, joint custody of children or tax breaks – was discriminatory and without a reasonable basis, and thus violated the constitution.

Nobuhito Sawasaki, one of the lawyers involved in the Tokyo case, told Reuters that the new precedent was “actually fairly positive” because it acknowledged shortcomings in legal protection of same-sex relationships in Japan and “suggested something must be done about it.”

Some Japanese municipalities issue certificates that allow same-sex partners to gain access to certain public services such as housing, on par with married couples. The system was pioneered by a district of Tokyo in 2015, with a scheme covering the entire metropolitan area launched in late October. The certificates, however, are not legally binding. (RT)