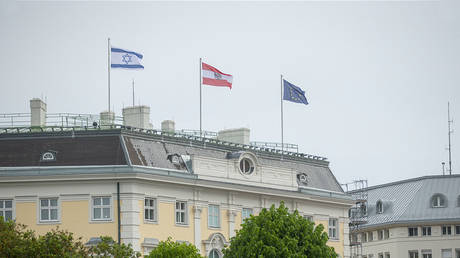 A post by the Austrian chancellor has received a mixed response online. While some, including the Israeli prime minister’s son, welcomed Austria’s condemnation of Palestinian “terrorism,” others slammed Vienna’s side-taking.

“Today was used as a sign of solidarity with #Israel the Israeli flag is hoisted on the roof of the Federal Chancellery,” Austrian Chancellor Sebastian Kurz tweeted on Friday, adding “the terrorist attacks on Israel are to be condemned in the strongest! Together we stand by Israel’s side.”

His post, accompanied by a photo of the country’s Chancellery flying the Israeli flag, while supported by some, has drawn extensive criticism on social media, leading some to question ‘Austrian neutrality’.

Chancellor of ‘neutral’ Austria seems to believe this stunt will win him support & deflect from domestic crisis?Israel authorities are subjugating Palestinians to system of apartheid & for decades have used excessive force against them.Blind support is dehumanizing & shameful

“If you don’t see the shameful facts and stand by Israel, you are at least as cruel and merciless as Israel,” one person wrote, adding that Vienna must be blind not to see this.

Many others highlighted that Israel’s attacks on alleged terrorist positions in Gaza were illegal under international law and urged Vienna not to support such criminality. One individual called on Kurz to “think carefully who the terrorist is here,” referencing to decades of Israeli occupation.

Several users responded with photos of innocent women and children injured by Israel’s assaults on targets in Gaza. One added sarcastically, “Austria stands by the side of innocent civilians and their children! Oh wait, nobody cares about you.” (RT)