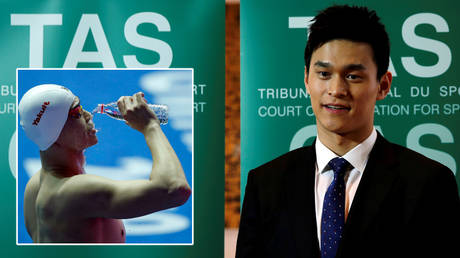 Chinese swimming superstar Sun Yang has been banned for more than four years – despite asking lawyers who had successfully represented Russian athletes in previous Court of Arbitration for Sport (CAS) hearings to represent him.

Three-time Olympic champion Sun’s hopes of defending his 200m freestyle gold medal at the Tokyo Olympic Games next month have been shattered after a retrial at the court, centering on a failed attempt by testers to take blood and urine during an unannounced visit to his home in China in September 2018.

Judges found Sun to have “acted recklessly” by refusing to let testers leave his home with a sample, with the the incident said to have turned ugly when a member of Sun’s entourage encouraged the smashing of a vial with a hammer to invalidate it for testing.

Sun denied wrongdoing on the original eight-year ban he was given last year, which was overturned on appeal to Switzerland’s supreme court after the chair of the three-judge Court of Arbitration panel was found to have shown anti-Chinese bias on social media.

In a fast-tracked trial ahead of the Olympics, which begin on July 23, three judges heard the case by video, including arguments for Sun by Geneva-based attorneys who had successfully represented Russia’s anti-doping agency and athletes at the court.

Swimming’s governing body, Fina, appointed a tribunal that decided to warn the 6ft7in athlete about his conduct, but the World Anti-Doping Agency (WADA) appealed to the court, requesting a ban of between two and eight years for a second doping conviction.

Sun had copped a three-month ban from Chinese authorities in 2014 for testing positive for a stimulant that was banned at the time, although the punishment was only announced after it had ended.

Sun made history when he became the first Chinese swimmer to win Olympic gold at the 2012 games in London, and was branded a drugs cheat by rival Mack Horton at the 2016 Rio Olympic Games, with the Australian refusing to join him on the podium at the 2019 world championships in South Korea.

The World Anti-Doping Agency (Wada) welcomed the ruling in a statement.

“The decision by the Swiss federal tribunal to set aside the CAS award was limited to a challenge made against the chair of the CAS panel and had nothing to do with the substance of this case,” said director general Olivier Niggli.

“Today’s ruling reconfirms Wada’s position in relation to the original Fina ruling, which was that there were a number of points that were inconsistent with the code. Today’s Cas ruling validates those concerns.” (RT)