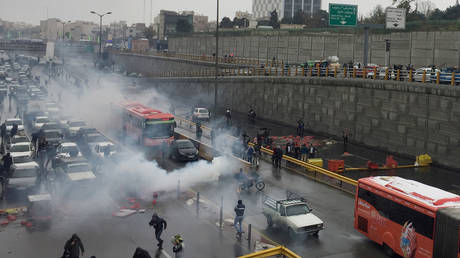 Riot police tries to disperse people as they protest on a highway against increased gas price in Tehran, Iran November 16, 2019 © Reuters / Nazanin Tabatabaee

FARS and ISNA agencies quoted a statement by Seyyed al-Shohada Corps division, that claimed the men “were stabbed to death” after being caught up in a “rioters’ ambush.”

Tuesday marked a break in protests, according to the judiciary spokesman Gholamhossein Esmaili who told a news conference that “calm has been restored in the country.” It comes after the IRGC warned of “decisive” action if the unrest does not cease.

The exact number of people who died in the fuel protests remains unconfirmed. In his Sunday address, Ayatollah Khamenei said “some lost their lives and some places were destroyed.”

It was previously reported that a police officer was killed by an angry mob while trying to defend a city police command in western Iran. Meanwhile, footage obtained by RT Arabic showed the headquarters for transport police in Karaj, just west of Tehran, on fire after it was supposedly stormed by violent protesters.