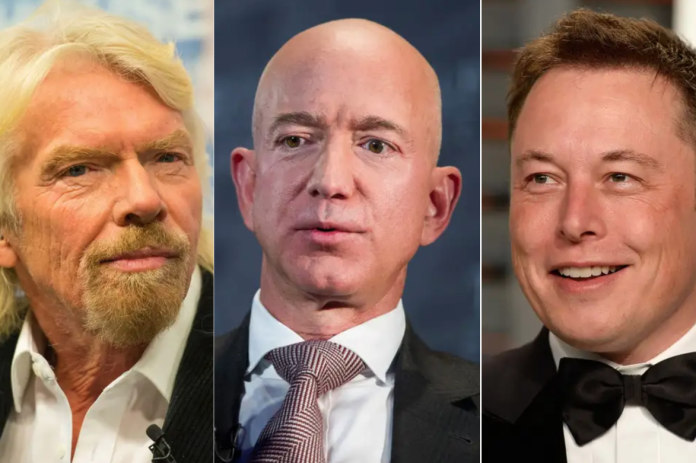 Billionaire Jeff Bezos says he was inspired to enter the private space race after watching the Apollo 11 mission 50 years ago and seeing “Neil and Buzz land on the moon”.

“I got infected by that,” he told CBS News, referring to the 20 July 1969 landing, involving Neil Armstrong and Buzz Aldrin. “You don’t chase your passions, they chase you. So I’ve been dreaming and getting ready for this for a long time.”

He added: “We humans have to go to space if we are going to continue to have a thriving civilisation. We’re in the process of destroying our planet. We’ve sent robotic probes to every planet in the solar system; this is the good one. We have to preserve this planet. We can do that using the resources of space.”

Half-a-century after those US astronauts beat the Soviet Union in a Cold War showdown to be the first to set foot on the moon, the space industry landscape looks very different. China, India and Europe are challenging the US’s once dominant position, and within the US, amid several dozen private entities, three major private players now dominate the space tourism and exploration sector – Bezos’s Blue Origin, Richard Branson’s Virgin Galactic and Elon Musk’s SpaceX.

“The only reason we can do the things that we can do today is because we are, in fact, standing on the shoulders of giants,” Bezos said this week, sitting alongside Caroline Kennedy, daughter of assassinated president John F Kennedy.

In 1962, Kennedy vowed to reach the moon by the end of the decade “because there is new knowledge to be gained”. Bezos said what he and others were doing now was only possible “because all of the things that came before”.

One would be forgiven for assuming a private space project was the ultimate ego trip for a middle-aged billionaire looking for kicks. But the projects of Branson, 68, Bezos, 55, and 48-year-old Musk began some years ago.

Bezos, the co-founder of Amazon and the world’s richest man, established Blue Origin in 2000, Musk set up SpaceX in 2002 and Branson established Virgin Galactic in 2004.

Branson’s inspiration, too, was watching the Apollo missions. “The moon landing is what inspired me to wish to go to space,” he said earlier this year.

“I saw it on a black-and-white television set when I was very young, and this year is the 50th anniversary so it’s a very great year to celebrate.”

Iain Boyd, a space exploration expert and professor of engineering at the University of Michigan, says while the three billionaires are each very different, they were likely inspired by a similar frustration.

He says in the years and decades after the Apollo missions, with the limited success of the space shuttle programme and fewer funds being awarded to Nasa, there was a sense of an opportunity being wasted.

“There was a generation that saw people land on the moon,” he tells The Independent. “But then they felt this sense of frustration.”

As a result, he says, it was perhaps natural that private entrepreneurs such as Bezos, Musk and Branson would seek to fill the gap.

He says he was among a group of scientists Musk addressed in the first few years after SpaceX was established, and when he was a lesser known entity, and less frequently dominating the headlines. “He came across as someone who was just really, really interested in space,” he says.

Branson’s current project seeks to send six passengers and two crew to the edge of space, about 100km (62 miles) above the earth, by means of a two aircraft. One, named WhiteKnightTwo, will carry the second, named VSS Unity, to around 50,000ft when they will separate and the second will fire a rocket engine that carries it to speeds of up to 4,000kph (2,485mph), and a height potentially as high as 110km. Passengers are due to experience five minutes of weightlessness, before the second craft glides back to earth.

In February, Virgin Galactic, which in 2014 suffered a deadly accident during a test flight that killed the pilot and badly injured the co-pilot, carried out its first successful flight with a pilot on board. It was done over the Mojave desert in California. Pilots Dave Mackay and Michael Masucci, along with astronaut trainer Beth Moses, reached an altitude of 55.87 miles.

This was higher than last December’s unmanned flight and above that used by the US Air Force as the definition of “space,” though it did not exceed the so-called Karman line of 62 miles, used by the International Astronautical Federation defines as the start of “space”.

“It was silent and beautiful and clear, and I was quite happy to be near the cockpit with our pilots, to celebrate apogee,” Moses said afterwards. “And we all sort of marvelled at how magic it was.”

Virgin Galactic, which this summer announced a merger deal with Social Capital Hedosophia (SCH) and a plan to go public, says it has $80m in deposits from more than 600 people able to pay the $250,000 price tag. It says it will launch its first flight as soon as possible, and Branson had hoped to fly to mark Apollo’s anniversary. Justin Bieber is said to be among those first 600.

Bezos’s current plan involves using reusable rockets to send a crew in a capsule to an altitude of 307,000 feet. The rocket returns to its launch pad, and the crew capsule separates and descends by use of parachutes.

A spokesman told US media this spring, its “New Shepard” rocket had flown to space “a total of 11 times, with two of the New Shepard boosters flying to space and back five times each consecutively”.

In many ways, Musk’s plans are the most ambitious. While his SpaceX rockets are already restocking the international space station, again with reusable rockets, the South African-born entrepreneur also wants to send people to Mars. He has said his project could be ready to send people to the Red Planet – a vast undertaking that many scientists are sceptical about – as soon as 2026.

Musk, frequently accused of making claims he cannot back up, last year told Axios on HBO that he saw a 70 per cent chance “he’ll live to ride one of his SpaceX rockets to Mars”. “I know exactly what to do,” he added. “I’m talking about moving there.”

Bezos has also talked of sending humans to other planets. Last year, addressing an event to mark the 25th anniversary of the launch of Wired magazine, he said be hoped to see the solar system populated “by one trillion people”.

“People are starting to bump up against the absolute true fact that earth is finite,” he said.

Experts say the private space projects of Branson, Bezos, Musk and others throw up new challenges, not just for technology and science but for areas such as the law. Right now, the Federal Aviation Authority has no rules governing space travel, other than a prohibition on systems that have previously failed, says Boyd, the University of Michigan scientist. Branson says the FAA has granted his company a commercial space launch license.

Experts say the Outer Space Treaty, a UN resolution first adopted in 1967 that prohibits the placing of nuclear weapons in space, is similarly lacking in detail.

There are also questions as to what impact the rush to reach other planets will have on our own. Some have said that by suggesting humanity can reach places such as Mars, there will be less incentive to address the pressing crisis posed by climate change.

“I’ve confirmed that Mr Bezos carries the collected works of the great Carl Sagan on his website. I would advise that he read what Carl Sagan had to say on this topic,” says Michael Mann, a climate expert and professor of Earth sciences at Penn State University.

“Sagan loved space exploration as much as anyone, and he envisioned us eventually travelling out into the cosmos. But he harboured no illusions about the near-term prospects for making that happen. That’s why he devoted the latter decades of his life advocating for the protection of this planet.

“Mr Bezos needs to absorb the sage advice of Sagan and invest his funds in efforts – environmental preservation and, especially, action to avert catastrophic climate change – that might actually accomplish his stated goals.”