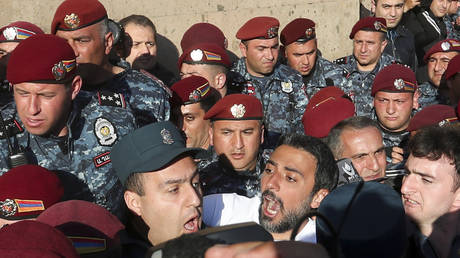 The country’s government refuted reports that it had requested help to deal with the protesters Police confront demonstrators in Yerevan, Armenia, May 5, 2022. © Vahram Baghdasaryan

Anti-government protests in Armenia’s capital city of Yerevan continued on Thursday, while the authorities have claimed that outside help is not needed to deal with the unrest.

A campaign to oust Prime Minister Nikol Pashinyan has been ongoing since April 25. The dissatisfaction was prompted by remarks by Pashinyan that many interpreted as displaying a willingness to compromise on the Nagorno-Karabakh issue, even going as far as giving the disputed territory away to Azerbaijan. Armenia and Azerbaijan fought a bloody war over control of the region in 2020, which has seen periodic flare-ups ever since, the most recent being this past March.

Despite numerous arrests, the protesters are determined to continue their action.

“We have started a hard and difficult work together, but be sure that together we will finish this work with a victory, because you are firm, strong and determined, we are united,” a key opposition figure and vice president of the parliament, Ishkhan Saghatelyan, said during a demonstration on France Square in central Yerevan on Wednesday, before inviting everyone back to the streets the next day.

More than 400 people were detained on Wednesday, while on Thursday 73 people have been taken to police stations, Sputnik News reported, citing a law enforcement spokesperson.

These numbers might increase, as protests have also been taking place in the evening. (RT)

In January-May this year, the Marketing and Economic Operations Department of the State Oil Company…

15:00 Bar Association: “We can provide legal assistance to any Azerbaijani citizens of Armenian origin living in Karabakh and accepting Azerbaijani laws”

13:40 Iranian official: Economic relations between NAM countries should be developed

13:00 Tests for detection of monkeypox virus transferred to Azerbaijan