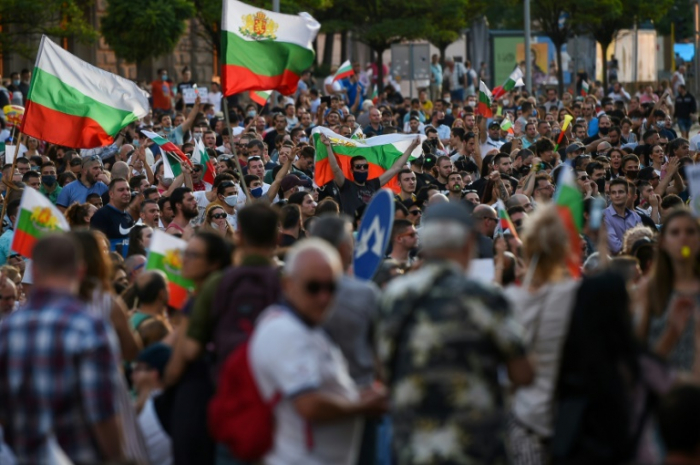 Thousands of Bulgarians, frustrated with endemic corruption, protested on Saturday for the third day in a row, demanding the resignation of the centre-right government of Prime Minister Boyko Borissov and the country’s chief prosecutor, according to Reuters.

Protests against what many called “state capture” and “mafia-style” rule were held in several other cities in the Balkan country.

Police arrested 18 people late Friday after scuffles during the anti-corruption protests, but the demonstration Saturday was largely peaceful.

Bulgaria, the European Union’s poorest and most corrupt member state, has long pledged to root out graft but has yet to jail any senior officials on corruption charges.

Public anger escalated following prosecutor raids on the offices of two of the Bulgarian president’s staff as part of investigations, which many saw as a targeted attack on President Rumen Radev, a vocal critic of the government.

In an address to the nation Saturday, Radev said the protests showed that Bulgarians had had enough and called for the resignation of the government and the chief prosecutor.

Borissov, whose third government took office in 2017, prided himself on building new highways, boosting people’s incomes and getting the country into the euro zone’s “waiting room,” and said he does not plan to step down amid a looming coronavirus crisis.

“We have done so much already, we have made so much efforts, nothing is keeping us in office except for responsibility,” Borissov said in a posting on his Facebook page.

His GERB party said Radev, who was nominated for the post by opposition Socialists, was stoking a political crisis. GERB remains Bulgaria’s most popular political party, according to opinion polls. The next general elections are due in spring 2021.

At another demonstration Saturday on the Black Sea coast near Burgas, hundreds of Bulgarians demanded access to a public coastline near the summer residence of Ahmed Dogan, a businessman and senior member of the ethnic Turkish MRF party. The demonstration was organised after the head of a small liberal party was denied access to the coast by armed guards of the National Protection Service, who were protecting Dogan.

Protesters say the move was a sign of toxic links between the ruling elite and shady interests in the Balkan country.