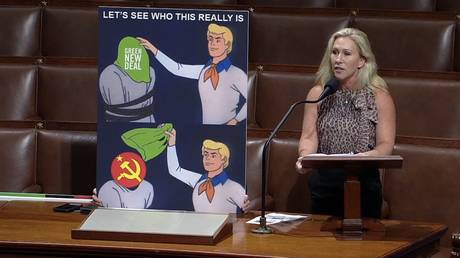 Memes might be powerful, but they belong on the internet, not in the US Congress, online commenters argued as they bashed Republican Representative Marjorie Taylor Greene for displaying a Scooby-Doo cartoon on the House floor.

Taylor Greene brought a meme featuring Fred Jones, a character from the popular animated series Scooby-Doo, to a Congress session on Wednesday to make her arguments against the Green New Deal more vivid to her fellow lawmakers.

During the Georgia congresswoman’s speech, her aide held up a large poster showing the unmasking of a cartoon villain, whose face had been replaced with a Chinese Communist Party emblem.

“This is a simple meme that you would find on the internet, but this meme is very real,” Taylor Greene said, explaining her stunt. “The Green New Deal – surprise! – serves China and China only,” she insisted, pointing to the red logo incorporating a hammer and sickle.

The Republican lawmaker then asked her aide to switch memes, with the new picture featuring a portrait of Chinese leader Xi Jinping and text reading: “I own Joe Biden.”

Taylor Greene has gained infamy in recent years for peddling various right-wing conspiracy theories, including QAnon and Pizzagate, as well as rejecting vaccines and the government’s other anti-coronavirus measures. The 47-year-old was suspended from Twitter for a week in July and August for posting “misleading” information about Covid-19. A strong supporter of Donald Trump, she has already made two attempts to impeach President Biden, the latest coming a month ago amid the botched withdrawal of US troops from Afghanistan.

It’s unclear whether the display of memes swayed anybody in the Congress to Taylor Greene’s side, but it definitely left her open to critics’ attacks… and generated even more memes.

“Congress is no longer serious with people like this,” fellow Congressman Adam Kinzinger said in reaction to the stunt. (RT)