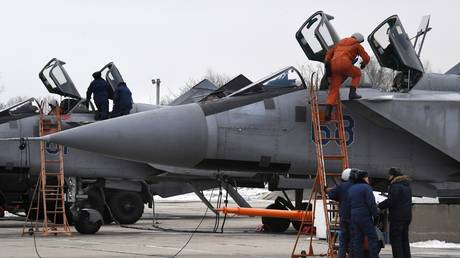 Several MiG-31 jets were written off the state balance sheet at a price of an ice-cream cone and then resold for millions to the same firm that already owned them, via a mind-boggling scheme by a double-dealing Russian official.

The details of the brazen fraud, which took place in the late 2000s, have been revealed only now, a month after the law enforcers were finally able to detain the man behind it.

A former civil servant in a branch of Russia’s Federal Agency for State Reserves (Rosrezerv) in Nizhny Novgorod, Andrey Silyakov, was arrested at his country house outside the city on the Volga River in late May.

He had been sentenced in absentia to 11 years in prison almost a decade ago but remained at large for years and was even put on an international wanted list. The man returned to Russia from abroad after apparently feeling homesick or deciding that the law enforcers have already forgotten about him.

Also on rt.com All for game realism? Russian jailed in US for ‘buying F-16 manuals to help make flight simulator’

But the scheme, involving the pride of the Soviet and Russian Airforce – the MiG-31 supersonic fighter jets – that Silyakov invented and implemented was seemingly really hard to forget.

The paths of the industrious official and the unique warplanes, which have been in service since the early 1980s, first crossed back in 2007. At the time, Rosrezerv decided to auction off some disused spare parts it had stockpiled, including iron rods and pieces of metal.

Shortly after the bidding, some new lots were unexpectedly put up for sale by the agency. They were described as ‘Assembly Kit 306-002,’ ‘Assembly Kit 306-003’ and so on, in order to avoid unnecessary attention, the Komsomolskaya Pravda tabloid revealed, citing a public prosecutor who dealt with the case.

The prosecutor said that Silyakov was the only one who actually knew that the mystery ‘assembly kits’ weren’t scrap metal but whole MiG-31 planes. The four aircraft were stored at – and at the time owned by – the local Sokol aviation factory, which has been producing an array of jets, including the MiG-31s and the newer 4++ generation MiG-35s. (RT)