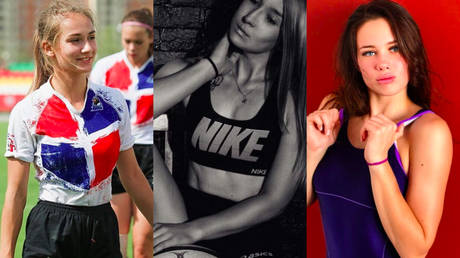 Rugby is not generally considered a typically female sport or often associated with Russia, but the country’s women’s beach rugby team are aiming to smash that stereotype with glory at the European Championship 2019 in Moscow.

In contrast to traditional rugby, played on a grass pitch with two teams of 15 players, seven-a-side beach rugby was invented in 1999 in Italy, when the Italian national team took their training sessions on the sand.

The women’s team will take on Spain, Austria and Croatia in their qualifying matches on Saturday a phase which also includes teams from Italy, Belarus, Latvia and Georgia, all battling it out for a place in the knockout stages on Sunday.

Recently, Russia’s women came so close to qualifying for a spot at the Tokyo 2020 Olympic Games, losing 19-0 in the final to England in Kazan at their home qualifying tournament, but are still eligible for a bid by finishing as runners-up in the tournament.

RT Sport spoke to Anastasia Voronchikhina, Russian team hooker and newly-crowned national champions ‘Vityaz’, from Perm in the Ural mountain region about beach rugby, the Olympics, tackling stereotypes, and the perils of finding a beach to train on.

Rugby isn’t often associated with Russians, not to mention Russian girls. How did you get involved in beach rugby and why?

Generally our team plays rugby sevens (seven-a-side rugby played on grass with seven minutes halves, played in the Olympics), but over the past two years we have played beach rugby with some success. Our coach this year became the acting manager for the beach rugby national team.

Beach rugby is actually a very dynamic contact sport. It’s very similar to rugby sevens, but also because of the small size of the pitch there are a lot of tackles and tussles, that make ‘beach’ more difficult to play than classic rugby.

Who will be your biggest rivals and strongest teams at the European Championships?

The most unpredictable opponent for us is Spain, who haven’t taken part in any such tournaments before. Italy and Latvia will also give us a good game.

How difficult is it to find places to play beach rugby in Russia?

In Perm there are problems with sand – and also with days of sunshine! We trained on the town’s municipal beach, asked the sunbathers to clear enough space for a playing pitch. All the people passing by, looked as us completely baffled: girls smashing into each other on the sand fighting over a ball shaped like a melon.

Does that reaction happen often?

Very often, even more so because I’m quite short. Eight out of ten people say that it’s not a sport for women, and I just smile at that phrase.

What do you usually say in response to convince them otherwise?

Often I say that your gender or physique isn’t important, but what’s important is your spirit and desire to play your favorite sport, to do exactly what you want.

Some guys a little afraid, they say: ‘what happened for you to become a rugby player!?’ My classmates at college are always making fun of me, saying things like: ‘get out of the way, car coming through!’. But I never take offence. They respect what I do and are always interested in my sporting successes.

Russia will play in the men’s rugby World Cup 2019 opening game against hosts Japan on September 20. The entire rugby world will be watching, how important is that for the sport in Russia?

I think it’s a really important step for the popularisation of rugby in Russia. Also in our country, rugby is well behind football in terms popularity. Also for Russian rugby it’s very important to win the bid to qualify for the Olympic Games.

During the women’s football World Cup this year, USA forward Megan Rapinoe often hit the headlines for her behavior and political beliefs. What do you think about such athletes, are they needed to promote women’s sport?

I think that we need such athletes. That girl is going against the grain, by fighting for equal pay for example. And her speeches inspire thousands of women in America and abroad. She can sometimes be a little too in your face and not mince her words, but she’s seen as an activist by many.

What would be the best way to develop and promote women’s beach rugby in Russia and around the world?

I think the media need to devote more attention to covering tournaments, in which women’s teams are competing. Not so long ago World Rugby launched the program ‘Women in Rugby’.