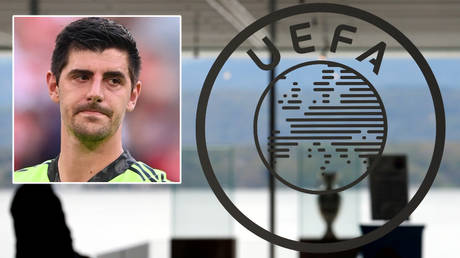 Belgium goalkeeper Thibaut Courtois has accused football’s governing bodies of prioritizing financial revenue over player health in a stinging rebuke of UEFA and FIFA’s handling of the global football calendar.

The Real Madrid shot-stopper issued his full-throated condemnation in the wake of Belgium’s 2-1 defeat against Italy in the UEFA Nations League third place play-off, a match he described as being a “pointless” addition to an already swollen football schedule.

Both teams made a number of changes to their starting lineups for the bronze medal match, with Belgium dropping stars Eden Hazard and Romelu Lukaku after both complained of minor injuries and fatigue following defeat by France in the finals on Thursday.

And with the ravages of the modern game continuing to be felt in the treatment room, Courtois let loose with a stunning rebuke of UEFA’s practices, alleging that so long as the money is coming in, player welfare is little more than an afterthought.

“This game is just a money game and we have to be honest about it,” an angry Courtois stated in his post-match interview. “We just play it because, for UEFA, it’s extra money and it is an extra game on TV.

Courtois, whose club were among the key signatories to the ultimately ill-fated European Super League proposal, was also highly critical of plans to hold the World Cup every two years, rather than retaining the current four-year gap.

FIFA, too, were unable to escape Courtois’ wrath as he launched into a diatribe about the potential changes to international football’s premier tournament.

Also on rt.com ‘Why a vaccine passport?’ Brazil president Bolsonaro claims he was barred from football game because he has not had jabs (VIDEO)

“Next year we have a World Cup in November, we maybe have to play until the latter stages of June again. We will get injured and nobody cares about the players anymore,” Courtois raged.

“After a long season, we will have to play four games in the Nations League again, we will have two weeks’ holiday – and that’s not enough for players to be able to continue playing for 12 months at the highest level.

“If we never say anything, it will always be the same. [UEFA] can be angry about other teams making a Super League but they don’t care about the players, they just care about their pockets.

“You hear that they want to put on a European Championships and a World Cup every year. When will we get a rest? Never.

Also on rt.com Qatar is trying to impose mandatory vaccinations on footballers who take part in the 2022 World Cup – report

“So in the end, top players will get injured all the time and that’s the end of it. It’s something that should be much better and better taken care of. We’re not robots.”

Plans for an overhaul of the schedule have been devised by FIFA’s head of global development, Arsene Wenger, after the UEFA Nations League was instituted as a means to overcome ‘pointless’ friendly matches which had come to dominate teams’ fixtures lists.

UEFA and many fans’ groups have already expressed opposition to plans to hold biannual international tournaments – but FIFA have stressed that the plans remain at an exploratory stage. (RT)