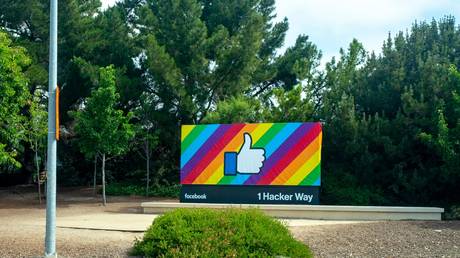 Sign with logo at entrance to headquarters of Facebook Inc at 1 Hacker Way in Menlo Park, California, decorated with a rainbow flag design in celebration of Pride Month. © Smith Collection / Gado / Getty Images

Conservatives love saying “get woke, go broke,” but that’s not necessarily the case these days. Corporations earn social credit by virtue signaling, and Pride Month, which falls every June, has woke capital putting its most progressive virtues on display.

Designed to mark the 1969 Stonewall riots and LGBTQ rights, Pride Month has become an opportunity for multinational corporations like Coca-Cola, Microsoft, Intel and so on to vomit rainbow colors onto their social media profiles like a herd of bulimic unicorns.

Everyone’s noticed, of course – it’s become something of a running gag and a joke among internet users. Elon Musk splashed a meme on Twitter showing off a mass of rainbow-colored logos in a whirlwind with the caption “Here it comes!”

Others have pointed out the irony in such a move. While corporations remain eager to tell the world how much they support progressive causes, they’re less likely to do so in the Middle East, where these very same companies chose to remain on the downlow and resisted putting up any such displays. So much for courage. 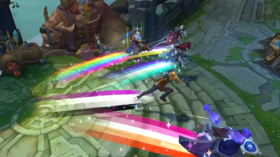 It’s just business as usual on the Middle East pages of the very same companies that sponsor drag-queen events for children in the United States and Europe. There’s an inconspicuous absence of rainbow flags and virtue signaling. Woke capital is absent in places where such displays of virtue would have the most impact. Extrajudicial killings of gays don’t matter all that much to corporations if it hurts their bottom line.

How courageous is it, exactly, to celebrate a cause that every establishment in the West supports? With the backing of the mainstream media, Big Tech, and even the US government, it’s not exactly transgressive to parrot what everyone else is saying.

The satirical Twitter account Titania McGrath (created by comedian Andrew Doyle) summed it up best when (s)he wrote in 2021, “It takes real courage for major corporations to display the Pride rainbow colours in our homophobic and heteronormative culture. And yet how wonderful to see that the Arab states are so progressive that the corporations don’t even have to bother.” (RT)

Fire breaks out in forest expanses in Khudat