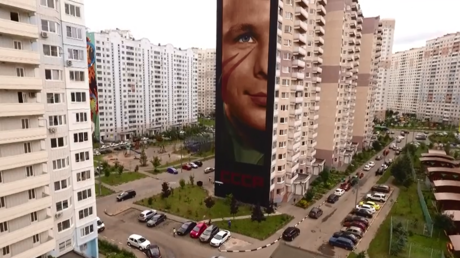 Moscow has a new attraction in a giant mural of Yuri Gagarin – the largest in Russia in fact. The street artist who painted it says he has hidden a secret message in his work, which he agreed to share with RT.

The 60-meter-high portrait of the first man in space, by Italian artist Jorit Agoch, now graces one of the buildings in Moscow’s Odintsovo neighborhood. Gagarin is shown with tribal red stripes on his check – the artist’s signature detail, and is smiling at the people below.

Agoch, who has been specializing in this type of art for over a decade now, says he included a small message somewhere in the mural, as he usually does. The message is… well, you can listen to his interview with RT to find out.