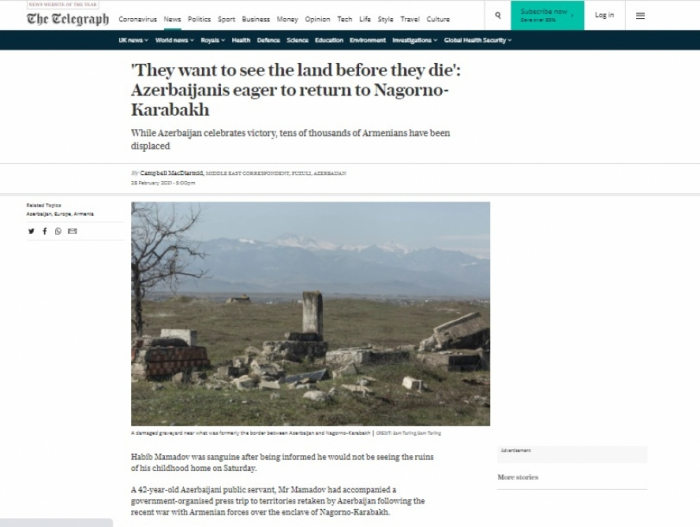 The Telegraph has published an article on the desire of Azerbaijani IDPs to return to Nagorno-Karabakh.

Author Campbell MacDiarmid, who visited the Azerbaijani lands liberated from the Armenian occupation, notes that hundreds of thousands of Azerbaijanis, who were expelled from the Nagorno-Karabakh region and seven surrounding districts, had never accepted this situation.

The article says Armenia took control of Nagorno-Karabakh and seven surrounding districts in the wake of the First Karabakh War.

“Azerbaijan never accepted the outcome, and in September last year, by the order of President Ilham Aliyev, a counter-offensive was launched to liberate the country’s occupied districts. In November, a Russia-brokered ceasefire was achieved. As a result, Armenian forces were forced to return large parts of the territory surrounding Karabakh,” it notes.

The article also says that Habib Mammadov, who was forced to leave Karabakh at the age of 14, was looking forward to returning to his home after 27 years.

The author also points out the destruction caused by Armenians in Azerbaijani territories.

He cites the Azerbaijani president as saying ‘the war that started in September was the last resort as the negotiations failed.’

The article also provides information about the ongoing renovation work in the liberated Azerbaijani lands. It notes that President Ilham Aliyev has allocated about 1.4 billion pounds for the reconstruction and renovation work in the liberated lands. The construction of an international airport in Fuzuli is underway, and a multi-lane highway leading to the city of Shusha is being built.

The author also touches upon the fate of Armenians living in Karabakh, stressing that Armenians who want to obtain Azerbaijani citizenship will exercise full rights.

Azerbaijan is a multi-ethnic state, and there are already 30,000 Armenians living in the country. But the rights on offer do not include recognition of Armenian as an official language, he adds.

“The official language in Azerbaijan is Azerbaijani and no other language has that status,” the author cites President Aliyev as saying.