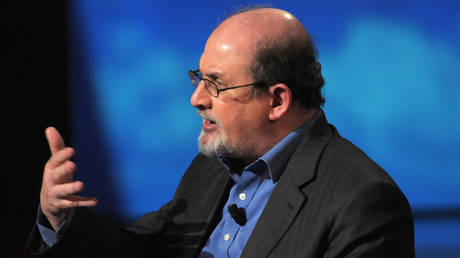 Salman Rushdie’s brutal stabbing revives debates on religion and freedom of speech, as well as fears of terrorism By Revd Frank Gelli, an Anglican priest, activist, and cultural critic. He has read philosophy and theology at London and Oxford Universities, served in parishes in London and also as a chaplain to the Church of St Nicholas, British Embassy, Ankara, Turkey. He has published several books on spiritual subjects available on Amazon, and lectured on religious/interfaith dialogue at many academic conferences in the UK, the United States, Switzerland, Qatar, Iran, and Italy.Salman Rushdie © Stefania D’Alessandro / WireImage / Getty Images

Salman Rushdie’s 1988 book, ‘The Satanic Verses’, has not lost its sulphurous potential. A zealot badly stabbed the aging author in New York. He sustained life-changing injuries. Was it divine chastisement or an act of satanic intolerance?

There are no ‘satanic verses’ in the text of the Koran. Surah 53, verses 19-20, reads: “Have you seen Lat and Uzza and Manat, the third?” An allusion to three female idols or goddesses worshipped by the Mecca pagans. It condemns them. The problem begins with a single tradition claiming that Satan impersonated the Angel Jibreel, tempting the Prophet to add another verse: “These are exalted cranes, whose intercession is hoped for.” Mohammed, they say, initially took the words as genuine but quickly spotted the deception and expunged them. Most Muslim exegetes reject the idea that Satan could trick the Prophet. That would undermine the certainty of revelation – a thought too horrible to contemplate. Islam preaches God the One, not a monstrous divine quaternity, comprising three female deities to boot!

Perusing ‘The Satanic Verses’ is a mixed experience. It’s a pretentious work, abounding in trendy literary tricks: Frame narrative, magical realism, dream visions, etc. The author occasionally entertains but there are also reams of tedious and plodding narrative. However, Rushdie displays a cunning way of beguiling the reader into his stories. The Prophet beloved by Muslims becomes ‘Mahound’, a disparaging name invented by medieval Christian scoffers of the rival religion. Mahound’s career cruelly satirizes that of the real Prophet. (Jibreel, who transmitted the Koran, is nicknamed ‘God’s postman’.) The hurt it causes believers must be deep – not unlike what I as a Christian feel when Jesus is besmirched. The Messiah, too, was tempted by Satan three times, but he told the foul beast to get lost. Satan came back at the Cross, hoping to get his prey, but like a greedy rat, was caught in the trap God laid for him. (RT)