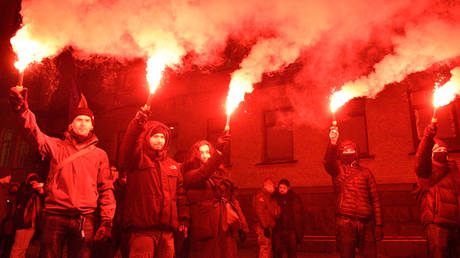 Kiev residents fire flares as they participate in a memorial rally dedicated to the 7th anniversary of the Maidan revolution in Kiev, Ukraine. © Sputnik / Stringer

The arrest of Viktor Medvedchuk, the leader of Kiev’s largest opposition party, shows US interference in Ukraine is all about winning a standoff with Russia and has nothing to do with promoting democracy or advancing human rights.

America often likes to insist that its approach to foreign policy is one of championing liberty and defeating authoritarianism. In the minds of many of Washington’s officials, US hegemony is synonymous with the cause of liberal democracy. They have done an excellent job in framing the Ukraine crisis through this lens – but is it rooted in reality?

The narrative put forward by Western commentators and politicians is that Kiev’s aspirations for democracy and freedom necessitate its turn toward the EU and US, but are continuously undermined by Moscow’s belligerence and desire to assert imperial-style control over the nation. The West, supposedly motivated solely by the altruistic values of democracy and human rights, “stands by” the country against the Russian aggressor.

Once the audience believes that premise, reporting on all events in the region ends up being seen in that light alone. However, to what extent does the US actually support Ukraine? Washington has gone against the democratic will and interest of its citizens at every turn, leaving it profoundly divided, with American oversight only granting political legitimacy to a certain group of Ukrainians.

Following the collapse of the Soviet Union, Ukraine took a two-track approach to foreign policy, cooperating with both the West and Russia. Common sense dictated that Kiev could only deliver national unity and economic prosperity by positioning itself as a bridge between Russia, its colossal neighbor, and the West. However, the expansion of NATO meant pressure mounted to choose one side over the other, either become part of the “new Europe,” or stand outside of it with Russia. Efforts to pull it into the US-led military bloc for “protection” from Moscow did not reflect the democratic will of its people, but instead was an effective ultimatum.

Read more:   Is the outcome of US election good or bad for Russia? Western media can't decide

Also on rt.com The end of strategic ambiguity? America has finally stopped pretending it would risk war with Russia over supposed ‘ally’ Ukraine

In 2004, anti-corruption protests against the graft-ridden political system swept Kiev. Western states intervened, supporting the protests, and hijacked the agenda by linking democracy, human rights and proper government to joining the NATO/EU sphere. However, only a small minority of Ukrainians actually backed membership of the bloc at that point.

Thus, without democratic support, the US pursued its geopolitical ambitions by engineering an artificial sense of “people power.” American ‘non-governmental organizations’, funded by the US state and staffed by former government officials, took an active part in the so-called Orange Revolution of 2004. For example, Freedom House was a leading sponsor of the uprising, and was chaired by former CIA Director James Woolsey. Yet, the prevailing narrative was nonetheless that US intelligence agencies had become humanitarian organizations merely supporting the will of the people.

After President Viktor Yushchenko was installed to lead Kiev’s new pro-Western, anti-Russian government, the country became more fragmented and tensions quickly rose with Moscow. Yet, polls consistently revealed that only approximately 20% of the population desired NATO membership and views of Russia remained positive. Nonetheless, the West insisted that it was standing up for Ukraine and in 2008 NATO promised that it “will become” a member of the bloc. This “support” was not consistent with the domestic reality, with a poll at the time revealing that 58% were opposed to membership and only 23.6% in favor.

Furthermore, only 15% of Ukrainians considered NATO actually would offer it “protection,” while 43% deemed the bloc to be a “threat.”

Toward the end of his term, Newsweek named President Yushchenko the world’s most unpopular leader due to his remarkable 2.7% approval rating. At the next election, in 2010, Ukrainians elected Viktor Yanukovich as president in what the OSCE defined as a free and fair election. Yet, he was never lauded with proper democratic legitimacy from the West due to his lack of ambitions to align with and sign up to their “democratic club.” Under Yanukovich, Kiev restored its status as a neutral nation by not looking to join any military blocs. During that period, the government sought national unity by respecting the rights of Russian-speakers. This was a version of Ukrainian democracy that the West simply didn’t want.

Kiev’s then-strategy of balancing itself between Russia and Western Europe failed in 2013 after the EU presented Ukraine with a zero-sum integration scheme. Just 37% of Ukrainians were even interested in membership of the geopolitical union, but in the eyes of Brussels and Washington, Yanukovich had betrayed his democratic mandate by failing to accept the EU’s Association Agreement. Western powers supported the protests and riots, even though they lacked the support of the majority of Ukrainians. Even fewer supported an all-out coup.

Yanukovich eventually accepted the establishment of a unity government to end the conflict, which Western states signed on as guarantors. When he was toppled soon thereafter, the same Western states sent their top officials to Kiev to boost the legitimacy of the coup, or “democratic revolution,” as they called it, rather than abide by their commitments to the unity government.

The leaders of the new Ukrainian government were a surprise to nobody, as a leaked phone call between American officials, Victoria Nuland and Geoffrey Pyatt, during the protests revealed that they had already put together a post-coup government and discussed plans to ensure it appeared legitimate.

Also on rt.com Seven years after Crimea rejoined Russia, Western leaders are fooling themselves if they hope peninsula can ever return to Ukraine

Over the next years, promoting human rights and democracy in Ukraine was made out to be the same thing as limiting Russian influence, and therefore suppressing domestic Russophone voices. Washington’s insistence on democracy and human rights, interpreted even through its own lens, becomes less and less important, as long as it stands to consolidate power in the country. Nowhere was this clearer than the bloody Odessa massacre, perpetrated by pro-Maidan nationalists, and Kiev’s bloody “anti-terrorist operation” against Eastern Ukrainians. Cultural and language rights were denied, political parties were purged and media censored. Any resemblance of fair elections falls away as Ukrainians residing in the West are allowed to participate in elections, while millions of Ukrainian citizens residing in Russia cannot vote. (RT)

Some 215 people received their anti-coronavirus shots in Azerbaijan today, the Task Force under the…