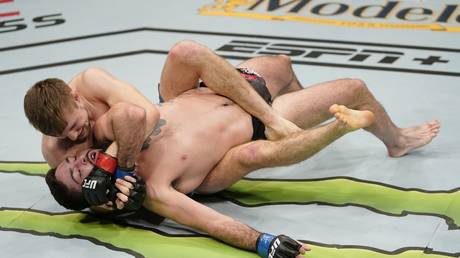 UFC featherweight Bryce Mitchell landed just the second ‘Twister’ submission in UFC history at the organization’s event in Washington DC on Saturday as he extended his undefeated run to an impressive 12-0.

The move, which contorts your opponent’s back, neck and limbs into an obscene angle, was the brainchild of Tenth Planet Jiu Jitsu head Eddie Bravo and has been seen just once in the octagon before when ‘Korean Zombie’ Chan Sung Jung used the same technique to coax a tap from Leonard Garcia in 2011.

Mitchell, who also goes by the name ‘Thug Nasty’, was awarded $50,000 performance bonus for successfully implementing the maneuver on his opponent Matt Sayles.

“That is the most painful move in fighting!”THUG NASTY! Bryce Mitchell gets just the second ‘Twister’ submission in UFC history!Incredible scenes at #UFCDC 🔥 pic.twitter.com/S8OFzMvUFm

Bryce Mitchell trying to squeak into the 2019 Submission of the Year race with that twister on Matt Sayles. Pretty sick. #UFCDC

It was another impressive win from the 25-year-old whose three UFC opponents to date have all come from respected gyms Team Alpha Male, The MMA Lab and Alliance MMA.

Mitchell was utterly dominant throughout the brief fight, taking Sayles down early and controlling the position throughout. He saw the opening for the Twister, attempting to position Sayles’ arm behind his head before applying the necessary pressure to finish the submission. (RT)