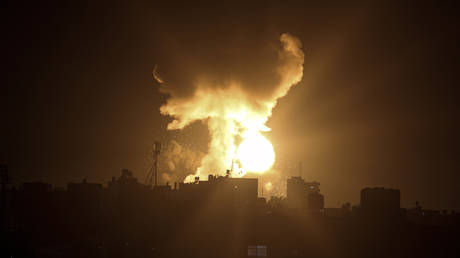 How both Israelis and Palestinians are creating a recipe for bloody violence An explosion caused by Israeli airstrikes is seen in the town of Khan Younis, southern Gaza Strip, Sunday Jan, 2, 2022. © AP / AP Photo/Yousef Masoud

The year 2021 was a bloody one even by the usually gory standards of the long-running Israel-Palestine conflict. Data from the United Nations shows that violence in the West Bank “reached a five-year peak,” with at least 79 Palestinians and three Israelis killed in a series of attacks, bombings, and confrontations. In the other Palestinian territory of Gaza, over 230 Palestinians were killed during the devastating 11-day war between Israel and Hamas in May 2021, while 12 people died in Israel – not to mention injuries and losses of property. Last year was the deadliest since 2014 and an ominous sign of what is to come.

With no formal peace process underway since talks last broke off over seven years ago, and frustration and anger building up amid zero hope on the horizon for a lasting diplomatic solution, the situation can be labeled as a tenuous tinderbox that can ignite at any moment in another bout of fighting and clashes. UN Special Coordinator for the Middle East Peace Process Tor Wennesland has warned that, “if left unaddressed, the festering conflict drivers will drag us into yet another destructive and bloody round of violence.”

In a clear recognition that matters could slip out of hand and repeat more deadly cycles of tit-for-tat attacks, Israeli Defense Minister Benny Gantz and Palestinian Authority President Mahmoud Abbas met in late December 2021 in the town of Rosh HaAyin. It was notably “the first time the Palestinian leader held talks with a senior Israeli official in Israel since 2010,” a step necessitated by what Gantz described as “deepening security coordination and preventing terror and violence – for the well-being of both Israelis and Palestinians.” Palestinian Civil Affairs Minister Hussein al-Sheikh labeled this dialogue as “the last chance before the explosion and finding ourselves at a dead end.”

But even as the Gantz-Abbas meeting triggered a wave of international optimism that it may be the first step for reviving a dialogue process and bringing the two sides back to the table to work out a formula on the world’s most intractable conflicts, a political firestorm broke out in Israel. Housing Minister Ze’ev Elkin, representing the conservative New Hope party, thundered in disapproval that “I wouldn’t have invited to my home someone who pays salaries to murderers of Israelis and also wants to put senior IDF [Israel Defense Forces] officers in prison in The Hague [at the International Criminal Court].” Livid cabinet ministers were quoted as grumbling that Gantz’s initiative “doesn’t contribute to the stability of the government.” 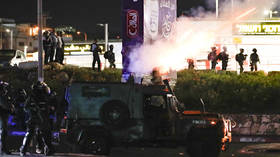 Whose Israel and whose Palestine? Extremists are running amok as leaderships fail

Prime Minister Naftali Bennett, who heads an unwieldy and ideologically fragmented eight-party coalition government, and whose right-wing Yamina party is closely associated with hawkish Jewish settlers opposed to yielding even one inch of the biblical Judea and Samaria (corresponding to today’s West Bank), was left in a precarious position and had to admit that Gantz hosted Abbas after his approval. To cover his back, though, Bennett clarified that the purpose of the talks was limited to improving security coordination and economic interactions, not to restart the peace process.

Under pressure from within his own party, and desperate to ensure that his contradiction-filled coalition government does not collapse, Bennett had previously dissociated himself from any revival of peace negotiations with the Palestinians:

“My perception is different than that of the defense minister, although we work in harmony. I oppose a Palestinian state and I think it would be a grave mistake to import the failed Gaza model of Hamas which shoots rockets at us, and turn the entire West Bank to that. I see no logic in meeting Abbas when he’s suing our soldiers in the Hague and accuses our commanders of war crimes. In my opinion, the Palestinian Authority is a failed entity.”

At the other corner of the spectrum in the coalition government is Foreign Minister Yair Lapid, the leader of the centrist Yesh Atid, who thinks that Israel has no option but to revive the peace process with the Palestinians. Citing an “intelligence-based assessment” that campaigns for international ostracization and designation of Israel as an ‘apartheid state’ could fructify in 2022, Lapid has publicly advocated a moderate stance:

“Without diplomatic dialogue with the Palestinians, this [the threat of Israel being designated an apartheid state] will only grow more severe. We need to be cautious of a situation in which the world says the Palestinians are promoting diplomatic talks and Israel is refusing. The claim that Israel is an apartheid state is a disgusting lie. These are a group of anti-Semites, but I don’t take them lightly.”

Still, such is the shaky political environment in Israel that Lapid, who is supposed to take over by rotation from Bennett and become the next prime minister in 2023, has been forced to assure his detractors that he would keep aside his own beliefs and stay away from dialogue with the Palestinians to preserve the coalition:

Read more:   ICRC hands over bodies of 1,500 servicemen to Armenia

“Even after a coalition rotation, I will remain with the same people and the same disagreements … I plan to stand behind the agreement I made with my partners. There is no reason for me to delude the Palestinians and open a diplomatic process that doesn’t have a coalition behind it … That would damage our credibility, which is important.”

When the foremost liberal politician in Israel has to hold his horses despite being cognizant of the blowback effect of the unstable status quo with the Palestinians, it shows how difficult the road ahead is for any diplomatic path forward. The obstacles come not only from the mood of the political class in Israel, where the mainstream discourse is largely ‘securitized’ and based on fear of granting any concessions to the Palestinians, but also from increasing social polarization. 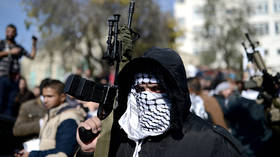 ‘New generation is capable of leading a new Intifada’

An opinion poll in December 2021 suggested that a slim majority of Israelis are in favor of a direct meeting between Prime Minister Bennett and President Abbas, and that 49% of Israelis even want their government to have “direct, open talks” with Hamas – an entity designated a terrorist organization by the governments of Israel, the United States, and the European Union.

But such barometers of what Israeli people want are deceptive and not indicative of policy-making, because the country’s electoral math is divided up according to vote banks. Former Prime Minister Benjamin Netanyahu, who was ousted from power in June 2021 after failing to cobble together yet another right-wing coalition in the Israeli Knesset, remains a formidable force. There is a clear pattern of Bennett and other rightists in the current coalition wanting to outdo Netanyahu and demonstrate an even tougher approach to crushing terrorism by Palestinian jihadists and expanding illegal Jewish settlements in the West Bank and Jerusalem. Any concession by Lapid or Gantz that crosses the red lines set by this overarching rightist milieu could plunge Israel into more uncertainty and chaos, following four inconclusive general elections since April 2019.

Former US President Donald Trump’s remarks that “I don’t think Bibi [Netanyahu’s nickname] ever wanted to make peace” with the Palestinians, and that “he just tapped us along. Just tap, tap, tap,” reveal the crux of the matter. Barring a few left-liberals, the Israeli body politic is invested only in managing the Palestinian problem in terms of stopping terrorist attacks or throwing a few economic sops at President Abbas’ moribund and unpopular Palestinian Authority, not in resolving the conflict per se. 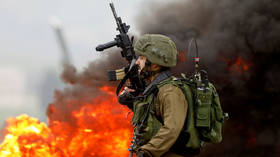 The much-talked-about ‘two-state solution’ of an independent Palestinian state coexisting beside the state of Israel, which was put forward as the final goalpost after the 1993 Oslo Accords, has lost traction amid a steady increase in what Israeli security officials themselves admit is a surge in Jewish extremism and ultra-nationalism.

In an August 2021 opinion poll, only 39.7% of Israelis favored the two-state solution. Most tellingly, within the group clinging to the fading dream of a two-state solution, just 33.8% were Jewish Israelis, while 68.8% were Israeli Arabs (citizens of Israel, most of whom consider themselves Palestinians and identify with their stateless kin living in the West Bank and Gaza).

The internal schism between Jews and Arabs within Israel has widened significantly, mirroring the internecine feud between Hamas and Abbas’ Fatah faction in the Palestinian territories. These two trends further hamper any progress in relaunching diplomatic efforts. While there never were monolithic unanimous categories of ‘Israel’ and ‘Palestine’, the parallel processes of disaggregation of national identities and widespread public cynicism about the intentions and performance of the ruling classes on both sides have created a huge credibility vacuum.

International negotiations can only succeed when there are two willing and coherent parties, each with domestic legitimacy and social consensus behind them. Neither Israel nor the Palestinian Authority has such a solid footing in their respective home bases.

Another factor deterring any move by Israel for peace with the Palestinians is what can be called the ‘outside in’ approach Jerusalem has adopted to the Middle East as a whole. The Abraham Accords, facilitated by Israel’s principal international backer the US, wherein four Arab countries – the United Arab Emirates, Bahrain, Morocco, and Sudan – formally recognized Israel and established diplomatic relations with it, have given Israel a sense of vindication without having to redress Palestinian grievances.

As Prime Minister Bennett put it in December, during his historic first ever visit to the UAE after the normalization of relations, there is “great optimism that this example, of ties between the two countries, will be a cornerstone for a wide-ranging network of ties throughout the region.” The Middle East has indeed traveled a long way from the 1967 consensus among Arab nations of the ‘Three Nos’ – “no peace with Israel, no recognition of Israel, no negotiations with it.” Israel is no longer persona non grata among many Sunni Arab countries, which have adjusted their national interests to do pragmatic quid pro quo deals with the militarily superior and economically vibrant Zionist state instead of resisting it. (RT)