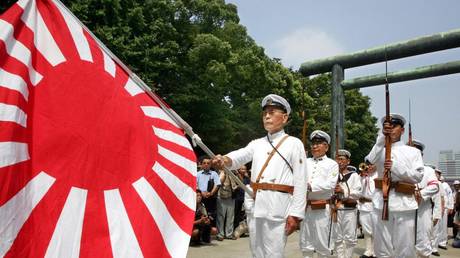 Sgt. Shoichi Yokoi kept on fighting for Japan for decades. His relatives told RT the story of his duty. Holding an Imperial Navy flag, a Japanese veteran leads others to offer prayers for the country’s war dead at Yasukuni Shrine in Tokyo, 15 August 2005. © AFP PHOTO / Kazuhiro NOGI

For the rest of the planet, World War II ended in 1945, but, for one foot soldier in the Imperial Japanese Army, it kept on going for another 28 years.

It was early evening on January 24, 1972, when two Chamoru hunters checking their fish traps in the Talo’fo’fo river that winds through the jungle on the Pacific island of Guam were startled by a wild-looking, barefooted man bursting out of the undergrowth in front of them.

Clearly as surprised as they were, the stranger flung aside the handmade fish trap he was carrying and attempted to seize one of the hunters’ rifles. But he was easily overwhelmed, subdued, and forced to accompany the pair back to their village, where one of the most extraordinary stories of the 20th century began to slowly unfold.

The man who appeared from nowhere in the evening gloom 50 years ago was Sergeant Shoichi Yokoi of the Imperial Japanese Army’s 38th Division. His last contact with the outside world had been 28 years previously, after US forces had regained control of the island from Japan, and, in the eight years prior to his encounter with the Chamoru men, he hadn’t spoken a single word to another human being. He was one of three Japanese hold-outs who had evaded capture, and the last to survive, hiding out in a cave and hunting by night.

This week, on the eve of the 50th anniversary of Sgt. Yokoi’s apparent return from the dead, his nephew, Omi Hatashin, whom the older man had treated like the son he had never had, spoke exclusively with RT.com. 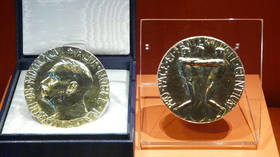 Speaking from Osaka, where he is a university lecturer in modern history and human rights, Professor Hatashin dismissed the mythology of the soldier who would never surrender that has since been created around his uncle and, instead, painted a poignant picture of a man desperate to belong to a family and instilled with a deep sense of humanity towards his comrades.

When Hatashin was just six years old, only a few months after he had reappeared in Guam and then returned to Japan, Yokoi had married Mihoko, the woman who would become the boy’s aunt. Yokoi was 56 years old at the time and his bride was 44.

The sergeant’s extraordinary story began on 31 March, 1915, when he was born in the city of Nagoya, where he was raised by his mother and stepfather.

In 1941, at the age of 26, while he was working as an apprentice tailor, he was conscripted into the Imperial Army and sent to serve in the 29th Division in Manchuria, in northeastern China. He spent three years working in logistics, where he was loathed by his fellow infantrymen, who considered the logistics personnel ‘soft’ and a burden to ‘real’ fighting men.

Prof. Hatashin recalls: “The Imperial Japanese Army really treated logistics very poorly. There was a saying that logistics men were inferior to horses and bulls in terms of physical strength, and so they were below animals in terms of status.

“But because of the dire circumstances the army found itself in, with a shortage of soldiers towards the end of the war, especially in defending Guam, the Japanese administration decided that all the logistics men must be furnished with more ammunition and should fight as soldiers.

“All the other infantry found this very offensive, asking, ‘Why do we have to fight in the same ranks as logistics men? They’re inferior to us!’ So, there was a very bad relationship between the men.”

In February 1944, as Japan sought to shore up its defenses in Guam, the former US territory it had occupied for three years, Sgt. Yokoi was ordered to be ready to ship out. He was told he was to be deployed to a secret destination, and was hastily bundled aboard a troop carrier with no idea what lay ahead. That ship was headed for Guam. 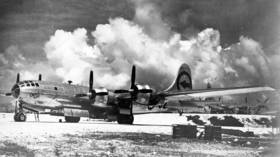 Despite its small population of 20,000, the island was of huge strategic importance. Japan seized it in December 1941, starting with an air attack on the capital, Hagåtña, just a few hours after its assault on the US fleet in Pearl Harbor in Hawaii, around 3,800 miles away.

In just three days, the Imperial Army overran the US possession, launching a massacre that left 600 dead and ensured the locals loathed the occupying force for the remainder of the occupation. This was the milieu into which Sgt. Yokoi landed in February 1944. He was immediately assigned to the supply corps of the Japanese naval garrison.

The Americans, outraged by the bombing of Pearl Harbor and shocked at being chased off Guam, had regrouped, however. In July that year, in a bid to recapture Guam, they launched one of the most devastating pre-assault naval bombardments of World War II. In the face of 55,000 US soldiers, the Japanese were soon defeated.

Read more:   China rolls out 'one of the world's largest' 5G networks

As the fighting raged around Sgt. Yokoi, he became separated from his platoon – he had been suffering terribly from diarrhea and had been in the latrine – and when he went to rejoin his men, they were nowhere to be found. 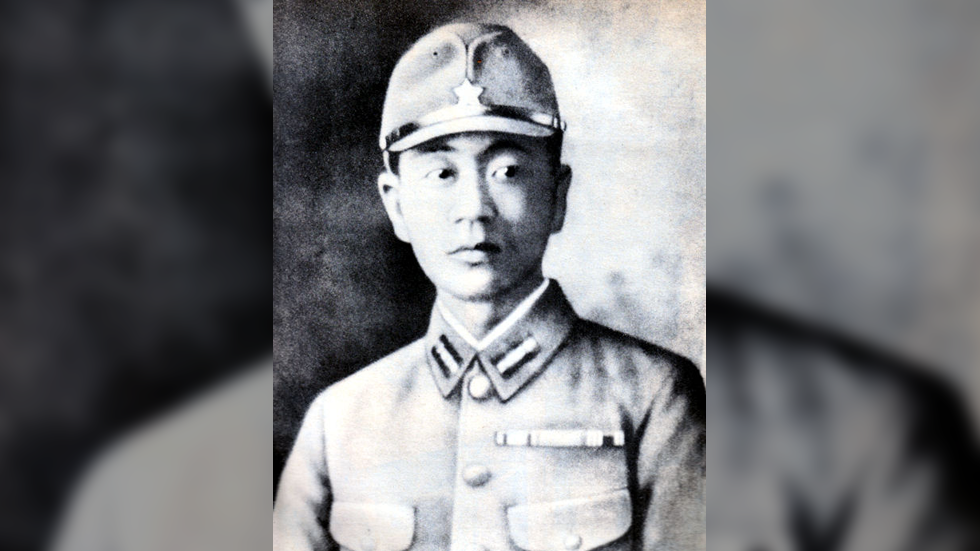 But he wasn’t alone. The Japanese ranks were in disarray, so Yokoi hooked up with a ragtag collective of nine soldiers under the command of an officer who had once been a Buddhist monk.

“The officer really wasn’t interested in fighting,” Prof. Hatashin said, “So, they looked for a way to build a raft and escape from Guam, where they hoped to be rescued by the Japanese Navy, or even the Americans.”

Although the loose-knit squadron continued to attack American positions under cover of darkness, the lack of food and disagreements over tactics led to a rift and the group disbanded, leaving Yokoi and two comrades, Shichi Mikio and Nakahata Satoshi, to tough it out as a trio.

Prof. Hatashin said that, at one point, the three men had attempted to surrender, but they had been met with such hostility from the people of Guam, who remembered the savagery of the invaders, that he and his two comrades had fled for their lives, vowing never to approach the locals again. So great was their fear of retribution that they stuck to that decision even in 1952, when they came across leaflets declaring that the war was over.

As time passed, their decision to stay together came under strain and Yokoi decided to live separately in his own underground shelter, but still close enough to his two comrades that they could commune with each other if the mood took them.

His new home consisted of an L-shaped hole seven feet below ground, about three feet high and nine feet long, supported by bamboo canes and accessed through a narrow, concealed opening via a bamboo ladder. The floors and walls were covered with bamboo, and he had even built an indoor toilet. He lived on shrimp, fish, eels, toads, rats and wild pig, foraging coconuts, breadfruit, and papayas from the surrounding jungle, and moving from his hideaway only at night to avoid detection.

While he existed separately from Mikio and Satoshi, they were not estranged, and when, sometime in 1964, he realized he hadn’t seen his neighbors for some time, he went to find them. Prof. Hitashin said his uncle had told him that, on entering their cave, he had struggled to find his way around in the dark, but his foot had struck an object that then rolled across the ground. When he managed to light a flame to investigate, he found it was a human skull. His comrades were dead. This crushing realization was as bitter a blow as any for Yokoi.

Despite later reports that they had died when their cave had been flooded, Prof. Hatashin said the devastation caused by Typhoon Karen, which struck Guam in 1962, had created long-lasting and severe food shortages that had made it difficult for the soldiers to forage or hunt for sustenance. The fact that their remains had been found in the cave led some to speculate that a buildup of carbon monoxide in their cramped underground home could have been the culprit.

For Yokoi, the loss of his companions must have hurt. Prof. Hatahsin said, “Throughout his life he had been terribly lonely, but it became clear that these two guys who lived in a hole in the ground in Guam had become his family.

“He was emotionally devastated, but somehow he convinced himself that he had a duty to report the death of the two guys back to Japan. He thought somebody must tell the government about this tragedy. In that way, he persuaded himself to survive.”

Yokoi’s mission was his salvation. It carried him through the final eight years of his isolation. He later admitted to his nephew that his sole purpose in staying alive was reporting the loss of his two comrades to his military superiors in order that their families could finally grieve. He made good on that promise to himself on his return to Japan, making his way to the homes of both soldiers to confirm the men had died.

Although Yokoi’s sense of duty, both as a soldier and as a man, never left him, the nation he served failed to reward his sacrifice. Prof. Hitashin says his uncle had officially been declared dead in 1947 and, as a result, his pay and pension had ceased at that point. Unbeknown to him, in the jungle of Guam, Sgt. Yokoi was fighting Japan’s enemies on behalf of his homeland entirely on his own.