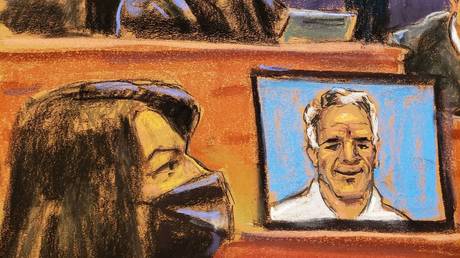 Ghislaine Maxwell attends her trial near an image of Jeffrey Epstein on a screen in a courtroom sketch. December 2, 2021. © Reuters / Jane Rosenberg

British socialite Ghislaine Maxwell’s criminal trial is underway in New York. She is accused of child trafficking, as well as grooming and recruiting underage girls for the late convicted sex offender Jeffrey Epstein to exploit.

Since her arrest in July 2020, Maxwell has continued to deny any wrongdoing, with her lawyers and family insisting she was Epstein’s puppet and is now paying “a blood price” to satisfy public desire to see somebody held accountable for the crimes. The trial is expected to last six weeks.

Who is Ghislaine Maxwell? 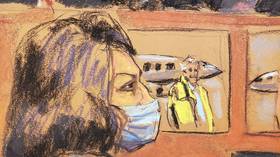 Maxwell, 59, is the daughter of late British media mogul Robert Maxwell, who owned a number of news tabloids, including the Daily Mirror. He died in 1991. His body was found floating near the Canary Islands after he fell off his yacht, which was named the Lady Ghislaine.

She moved to New York in the early 1990s and became romantically involved with Epstein, a multi-millionaire investor who counted elite executives and politicians among his friends.

Epstein died in 2019 in a Manhattan jail cell while awaiting trial on sex abuse charges. His death was recorded as suicide.

What is Maxwell on trial for?

Federal prosecutors have said they will prove she was an active accomplice who helped Epstein “recruit, groom and ultimately abuse” victims as young as 14.

She also faces two charges of perjury, with authorities claiming that Maxwell lied under oath when previously questioned about matters pertaining to Epstein.

While this trial will not address the perjury charges, Maxwell is up against a total of eight counts in federal court.

What has the prosecution/defense claimed? 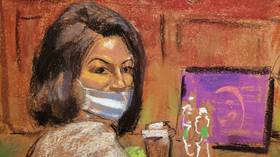 The prosecution has told the court that Maxwell and Epstein were “partners in crime” who plied their vulnerable victims with a “playbook” of money and gifts.

Read more:   Azerbaijan's share in German trade with S.Caucasus countries up to 80%

Meanwhile, the defense attorneys have called Epstein the “proverbial elephant in the room” during the trial and urged jurors not to make Maxwell a scapegoat for his crimes. They have even referenced the biblical tale of Adam and Eve to signify how women have been “villainized and punished” for the “bad behavior of men.”

Who has testified so far?

Four of the alleged victims are expected to testify, as are their relatives and Epstein’s former employees, along with expert witnesses. The first day of the trial saw Epstein’s long-time pilot Larry Visoski take the stand, describing the pedophile financier’s so-called “Lolita Express” flights.

While Visoski said he never saw “any sexual activity,” he testified that former US president Bill Clinton, British royal Prince Andrew, and Donald Trump, among others, flew on Epstein’s private planes.

Read more:   How to keep your delicate brain safe

The prosecutors have said the abuse occurred at a number of Epstein’s homes, including his estate in Palm Beach, Florida, his posh Manhattan townhouse, a ranch in Santa Fe, New Mexico, a Paris apartment, and a luxury estate in the Virgin Islands.

During his testimony, Visoski said it was “not unusual” for Maxwell to sit with him in the cockpit. He also recalled flying Virginia Roberts (now Virginia Roberts Giuffre) who has accused both Epstein and Prince Andrew of abuse.

The first of the four accusers, identified only by the pseudonym “Jane,” provided graphic testimony about being forced to have sex with Epstein when she was 14, 15, and 16.

She noted that Maxwell and others were involved at times, adding that Maxwell would instruct her in how Epstein liked to be massaged. “Jane” said she traveled with Maxwell and Epstein about 10 times between Florida, Manhattan, and New Mexico.

Epstein’s driver and butler, Juan Alessi, has also testified to Maxwell instructing him to bring both “Jane” and Roberts to Epstein’s Palm Beach mansion. (RT)