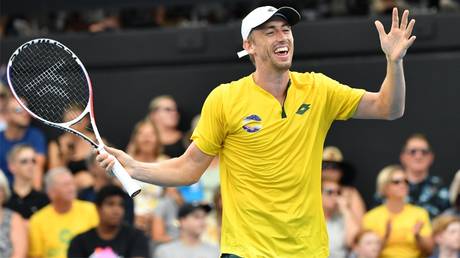 Australian player John Millman says he wants his second-round match against Stefanos Tsitsipas to be played in front of as rowdy a crowd as possible at the Australian Open.

Tsitsipas enjoyed vociferous support from Melbourne’s strong Greek contingent when eased his way through his first-round match, and he will be a huge favorite to progress again when he takes on Aussie hopeful Millman.

And even though Tsitsipas has called on his fans to show more respect to his opponents, Millman said he actually wants to play the match in a more raucous atmosphere.

Millman received plenty of local support from the stands as he defeated Frenchman Ugo Humbert in four sets to book his place in the second round.

And the Australian world No. 47 says he loves nothing better than an on-court slugfest in front of a lively crowd.

“I like feeding off the crowd’s energy. I try to bring that physicality, and sometimes you need that little bit of motivation on the sidelines.

“I love playing on that court, actually, in Show Court Three. I have had some really good moments there. And, you know, the more rowdy they are, the drunker they are, the better!”

Millman even went as far as to suggest that the tournament organizers should ply the crowd with Luzhou Laojiao, a particularly potent Chinese liquor that also serves as one of the tournament’s sponsors.

Unlike the main courts, which feature allocated seating, matches on the outside courts in Melbourne are non-ticketed affairs, where fans with admission passes can roam as they please and attend whichever matches they like.

Read more:   Nihat Kahveci: "There is great support for football in Azerbaijan"

It also tends to attract that more everyday Aussies, rather than those more affluent members, who stick to the show courts, and often makes the atmosphere on the outside courts less uptight and more vociferous, as the crowd gets more involved in the action as it unfolds.

“We are an entertainment business and we’ve got to get people from all walks of life through the gates and appreciating tennis and all the other things,” said Millman.

“I love it. I use the crowd. I love the support that I get here in Melbourne. It makes the matches really memorable and worthwhile.” (RT)