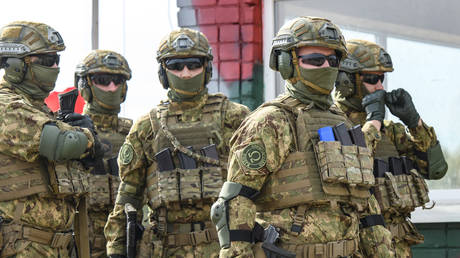 Purported plans for guerrilla war could see the country brought to the brink By Tarik Cyril Amar, a historian from Germany at Koç University in Istanbul working on Russia, Ukraine, and Eastern Europe, the history of World War II, the cultural Cold War, and the politics of memory. He tweets at @tarikcyrilamar.FILE PHOTO. © Maxym Marusenko / NurPhoto via Getty Images

With fears of a conflict breaking out between Russia and Ukraine, there has been no end of speculation about how the standoff could spiral into all-out fighting. Some of the theories and purported plans come with evidence, others don’t – but in their own way, they’re all intriguing.

Not surprising, but still revealing, are reports that the CIA have trained special forces in Ukraine to defend the country against a possible invasion. In all likelihood, the scheme would have included far-right fighters. Through well-timed leaks and statements by anonymous “persons familiar” and conveniently retired US officers, these trainees are now presented as the potential backbone of a guerrilla-style resistance force.

The purpose of advertising this fact now is clear: to deter Russia from launching that large-scale attack on Ukraine that Washington alleges is coming, Moscow denies planning but won’t rule out either, and Kiev cannot really make up its mind about: If you, Russia, occupy substantial parts of Ukrainian territory, so goes the American message, we’ll turn this into a bloody quagmire for you. In essence, what the late US national security adviser Zbigniew Brzezinski was always proud of having done in – and to – Afghanistan during the Soviet intervention there in the 1980s.

The training program was started under Obama and extended under Trump (another nail in the coffin of claims he was a Russian agent) and then Biden. It inhabits a twilight world of ambiguous terminology and not very plausible deniability. Somehow it’s all very defensive, allegedly, but then again, in reality it is, of course, not – and no one is actually supposed to buy the cover story because then it would have little deterrence value. The “tactical skills” taught in such programs are, of course, at least as useful for attack and sabotage as for “mere” intelligence gathering and defense.

Never mind that there is a “good chance that the CIA is training actual, literal Nazis,” as Jacobin has put it, entirely realistically: If you have any idea at all about the virulence and the modus operandi of the Ukrainian far right, then you know that this is exactly the opportunity its cadres crave. And if you have any realism left about what the CIA does, then you know that it does not mind training fanatics. Never did, from Latin America via Afghanistan to Syria and Ukraine. In fact, if anything the Agency has a massive bias for them. (RT)