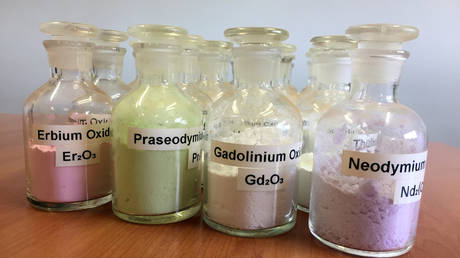 Rare earth metals have been a weakness for the US in the ongoing trade war, but new exploration efforts in the US and Australia could change the situation completely.

Dominance is not a word that the Pentagon and the White House like to hear when it’s not preceded by “US.” Right now, amid a trade war with Beijing, it is a word that officials want to hear even less when it’s preceded by “Chinese.” Yet in one strategic area, there is a true Chinese dominance that has many people worried.

Rare earths are a group of 17 chemical elements crucial for a variety of products, from magnets to batteries, including EV batteries—a nascent battlefield for various battery technologies. China is home to 85 percent of the world’s rare earths production capacity, and unlike other countries, it has spend decades developing the most efficient technologies not just for extracting them but for processing these seventeen metals as well.

Also on rt.com What are rare earth metals & why they are China’s ‘nuclear option’ in trade war with US

The United States, on the other hand, imports most of the rare earths it needs—with 75 percent of these imports coming from China—and there is a fear if China decides to use its rare earths monopoly as a weapon in the trade war, the damage could be significant.

There is a sound reason for this fear, because there is precedent of China weaponizing its rare earths production and processing capacity. Eight years ago, a trade dispute with Japan irritated Beijing enough to embargo rare earths exports to Japan. The frantic stockpiling sent prices sky-high.

Luckily, China is not the only place that has rare earths. In fact, there is at least one untapped deposit of these elements in the United States itself, and now two companies are preparing to tap it. USA Rare Earth and Texas Mineral Resources Corp. recently joined forces to develop the Round Top deposit in Texas, which, according to the companies, has abundant reserves of 15 of the 17 rare earths along with other minerals deemed critical for US national security. What’s more, developing these reserves would be cheap enough to make it competitive.

The joint venture of the two companies envisages capex of $350 million initially and estimates the payback period on this capex at just 1.4 years. Annual production is seen at over 2,000 tons with the economic life of the mine estimated at 20 years, to mine 14 percent of the existing resource estimate. Since expectations are that there will be more extractable resources, the mine’s potential life could span 140 years. Startup is scheduled for 30 months from now. (RT)