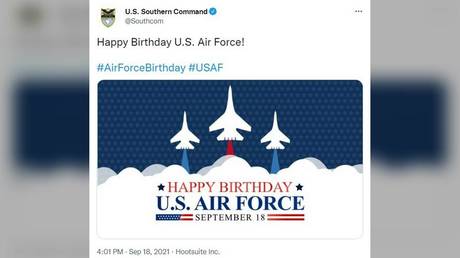 The official Twitter account of US Southern Command is facing mockery after it posted a picture featuring silhouettes of Russian Sukhoi fighter jets to mark the US Air Force’s birthday.

The simple graphics, posted on the occasion of the 74th birthday of the USAF, featured three top-down views of warplanes. The silhouettes don’t feature much detail, but their tail sections strongly implied that the aircraft are not from the fleet deployed by the American armed forces. Instead, they strongly resemble Sukhoi Su-27 twin-jet fighters.

The apparent gaffe was met with a strong reaction on social media that leaned heavily towards mockery.

Tovarich, don’t you have any USAF on staff to let you know what’s wrong with this graphic? pic.twitter.com/jPz7q814d6

One user suggested a simple fix to the image, replacing the silhouettes with those of F-22 Raptors.

Happy Birthday Air Force! Southern Command — I redesigned your graphic using F-22 Raptors.Consider it a little Creative Direction – free of charge.These aircraft were designed to destroy the ones in your original post. Cheers! pic.twitter.com/JkDiNPd9Kz

Another said he “chooses to believe” that the aircraft in the picture were actually the Raptor’s less-successful competitor in the Advanced Tactical Fighter, proposed by Rockwell. (RT)