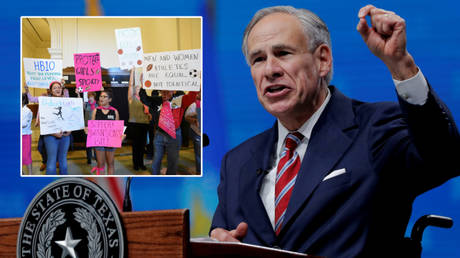 The governor of Texas is set to sign a bill stopping transgender pupils from joining school sports teams matching their gender identity – and that has led to accusations that the law has been lined up as a distraction tactic.

LGBTQ rights campaigners claim that the bill, which governor Greg Abbott appears to be on the brink of finalizing, will be perceived as a “vendetta” and is making transgender children a “boogeyman” that the public has a dwindling appetite for targeting.

In the now-familiar debate which has raged in many US states, supporters of the bill are arguing that it is about ensuring fairness for participants competing according to their birth gender, with a sponsor suggesting that it would prevent boys from suddenly deciding they were girls in order to gain an advantage.

The proposed bill would require schools to assign athletes according to the gender noted on their birth certificates “at or near” their time of birth.

HB 25, an anti-transgender sports ban, has now passed the Texas House and Senate and is expected to be signed into law.#TXlege#ProtectTransKids#LetKidsPlaypic.twitter.com/VdqWa79eZM

The Republican-controlled house repeatedly stalled the bill, but has now twice cleared it either side of the state Senate approving it.

Abbott, who is said to have voiced his readiness to sign it, now has the final say over legislation that would remove an existing regulation allowing transgender students to compete subject to receiving a court order allowing them to switch the gender on their birth certificate.

“This is all about girls and protecting them in our [school] sports,” Republican Valoree Swanson, a lead sponsor of the bill, said during the House debate.

“We need a statewide level playing field. It’s very important that we, who got elected to be here, protect our girls.”

Mary Elizabeth Castle, a member of a group, Texas Values, in favor of the ban, claimed that that more than 22,000 emails had been sent to Texas lawmakers supporting “this legislation that will protect female sports.”

Yesterday, the Texas House took a final vote on HB 25, which will block transgender Texas children from participating in school sports, & sent the bill to the governor’s desk. Texans know what this bill is, the Bathroom Bill 2.0: A mean-spirited attack on vulnerable children. pic.twitter.com/rkEnWJR0tN

Sport has always been split by sex because sex offers undeniable, inherent, advantages. It’s not split by gender. Let trans people identify with whatever gender they want, but they need to compete in the same sex group.

“We’ve heard from UIL [the University Interscholastic League] also that they’re getting more and more calls with concerns about changes in birth certificates and males competing in female sports,” Castle added.

Kate Oakley, the state legislative director and senior counsel for LGBTQ advocacy organization the Human Rights Campaign, said that the four House sessions required to progress the legislature “shows how serious the opposition to this bill is.”

“They’ve got a failed electrical grid and a Covid crisis, but they’re gerrymandering and attacking trans kids and reproductive rights,” she told NBC, adding that Abbott “has an eye toward higher office and is being challenged from the right.”

Texas is said to have one of the largest transgender populations in the US and the most reported killings of transgender people of any state.

“It’s easier to rally the base with bullsh*t and fear because reasonable people aren’t paying attention,” said Rachel Gonzales, the mother of an 11-year-old transgender girl.

Earlier this week, I joined mayors from some of Texas’ largest cities in voicing our opposition to the State’s HB25—which needlessly targets transgender children and their families.Texas should be prioritizing crucial issues like our electrical grid and this pandemic. pic.twitter.com/AKzrtXiQLZ

No. They can still play. Males with males, females with females. This is about the physical safety of the girls – a fractured skull is worse than hurt feels. Stop prioritising the demands of males over the safety of girls.

“Instead of people talking about all the things [legislators] are not doing, it’s like, ‘Look at this shiny thing.’”

Gonzales’s daughter, Libby, testified before the House, speaking of those who “don’t want to understand us”.

“People were yelling at us, calling me a child abuser,” said Gonzales. “We’ve been at this for a while, and I’ve never seen it this bad.

“These lawmakers are emboldening violence by voting on whether transgender people have a right to exist and live their lives.

There are no documented incidents in Texas of a transgender girl taking an athletic opportunity away from a cisgender girl, but the damage done to the mental health of our transgender students is well-documented.

“Someone has to stay and fight [rather than leave the state]. Unless there was a bill that would put us in jail or take our daughter away. Then, I’d be like, ‘We need an exit strategy.’”

Read more:   Germans say far-right MORE DANGEROUS than Islamists, but is Merkel's shaky govt there to take on growing threat?

Around 4,000 calls to a crisis hotline reportedly came from Texas as the number of people seeking help soared by 150% between January and August, according to data released by the Trevor Project, an LGBTQ youth suicide prevention and crisis intervention organization, and cited by NBC.

Of more than 130 anti-transgender bills in 33 states introduced in the current legislative session, 52 are said to have been introduced in Texas – the most of any state.

Austin’s KVUE-TV quoted Republic State Senator Charles Perry, a sponsor of the bill, as saying: “What if a boy decided that day he was a girl, just to get a nefarious advantage?”

Oakley said that the failure of some bills related to transgender people, including the ‘Bathroom Bill’ which would have restricted their use of changing facilities and toilets, is a sign of “how unappealing it is to be perceived as having a vendetta against trans kids.”

“The public is getting tired of this boogeyman,” she added. “There have been lawsuits filed in other parts of the country over laws like this [latest legislation]. We may see that’s next in Texas.”

Eight other states, including Alabama, Florida and Tennessee, are said to passed transgender sports bans.

NBC said that Abbott did not respond to a request for comment.