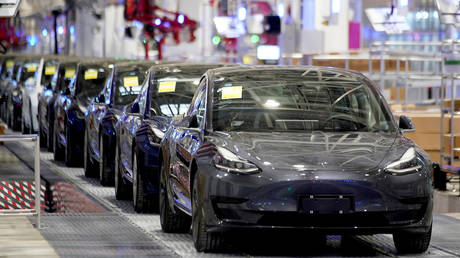 Electric car maker Tesla became the first $100 billion publicly listed US carmaker on Tuesday. It eclipsed the combined value of US auto giants General Motors and Ford, despite generating far less revenue than its competitors.

The company’s shares climbed as much as 1.4 percent in after-hours trading on Tuesday to $555 after closing the regular session up 7.2 percent.

Tesla has seen its stock more than double in the last three months, fueled by a rare quarterly profit in October of just $143 million, as well as news of production ramp-up in its China factory and better-than-expected annual car deliveries.

Tesla’s market value is surprising considering that its revenues are dwarfed by its non-electric rivals. Its yearly revenue for the quarter ending September 30, 2019 was $6.3 billion, a 7.63 percent decline year-over-year.