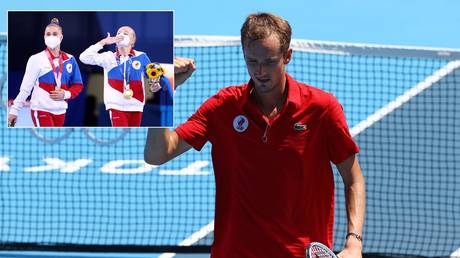 Daniil Medvedev snapped at a reporter in Tokyo on Wednesday after a question about Russian 'cheaters'. © Reuters

Even though their country has been punished, some Russian competitors in Tokyo are being tarred with the brush of a doping scandal that has nothing to do with them. It seems some people can’t handle their mere presence in Tokyo.

Russian world number two Daniil Medvedev reacted angrily on Wednesday when asked by a reporter in the Japanese capital: “Are Russian athletes carrying a stigma of cheaters in these games and how do you feel about it?”

“You should be embarrassed of yourself,” Medvedev fired back.

“I think you should [remove] him from the Olympics, I don’t wanna see him again.”

Medvedev, it seems, is fed up of suggestions that he is guilty by association. Tarnished merely because of where he was born, and the country which – under normal circumstances – he would be representing at events like the Tokyo 2020 Games.

Russia, if you remember, has faced long-running doping allegations since the Sochi Winter Olympics in 2014.

In December 2019, the country was hit with a four-year ban from major events by WADA for allegedly manipulating laboratory doping data, which was later reduced to two years on appeal.

Those punishments have dismayed the likes of US Anti-Doping Agency (USADA) chief executive Travis Tygart, who claimed that Russia had actually got off with just a slap on the wrists.

Also on rt.com Using sport as a political tool? USADA chief declares only ‘full ban’ on Russian athletes will do

Tygart was among those who wanted nothing less than a blanket ban on Russian competitors – meaning even ‘clean’ ones with no doping history would be barred from events such as the Olympics, supposedly to teach the nefarious Russian leadership a lesson.

“A blanket ban can make the Russian leadership realize the seriousness of the mess they have created – for themselves and for their athletes,” said WADA vice president Linda Hofstad Helleland back in 2019, joining in those calls. 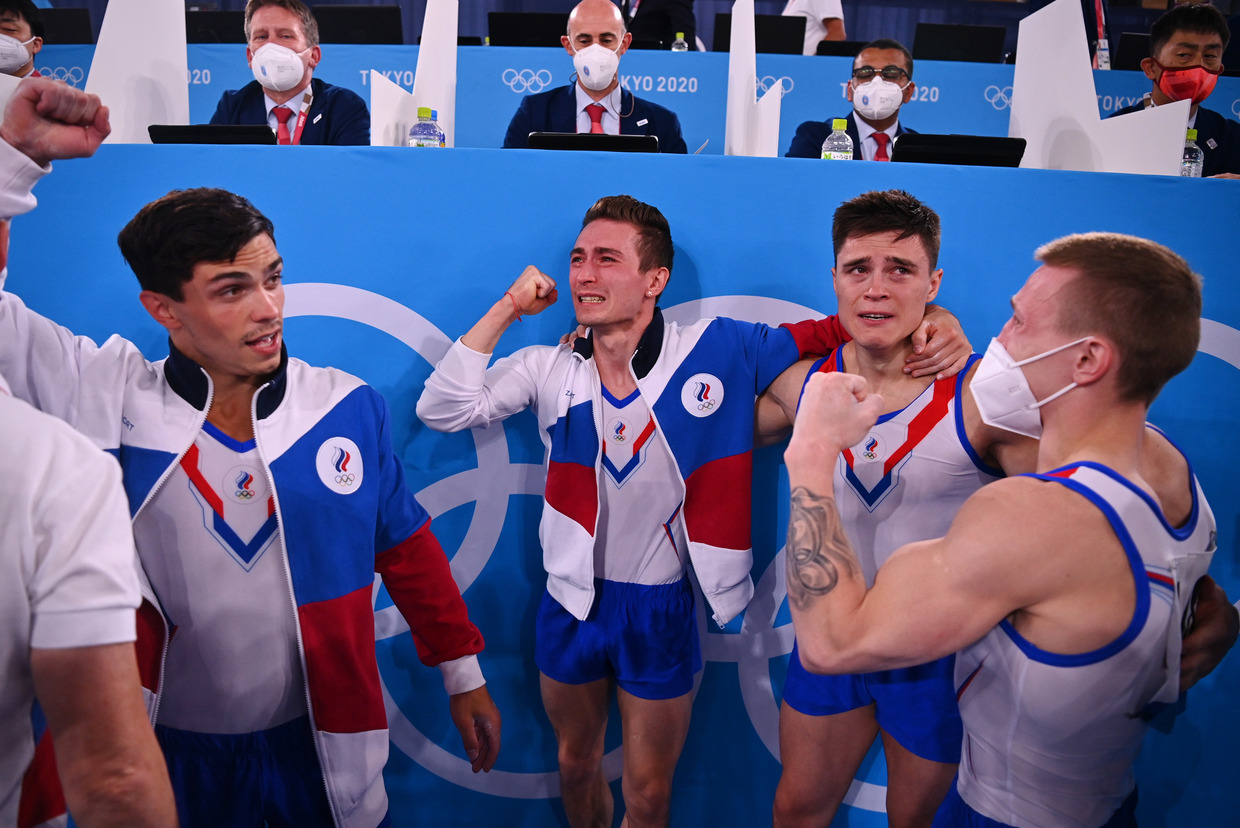 Some people don’t want to see any Russian athletes at the Olympics, even under neutral status. © Reuters

Fast forward, and Russian athletes have been allowed to descend on the Japanese capital this summer as the ROC team (the Russian Olympic Committee), but without being able to display their homeland’s flag or listen to its national anthem.

But the blanket ban mentality is still prevalent among many, particularly in the West. At the turn of the week, a hatchet job from Yahoo scribe Dan Wetzel showed the worst of this to match the questioning of Medvedev.

In a cringey, cliché-ridden attack mentioning spies, the KGB and state-controlled propaganda, Wetzel seemed to resent the very presence of Russian athletes before conceding a salient point right at the end of his hit piece.

“Yet punishing innocent athletes seems unfair — gymnast Elena Gerasimova, for example, was 9 years old during the Sochi Olympics. It wasn’t her fault,” he writes.

So why are the clean athletes competing in Tokyo, and performing impressively at that, any different?

Why should they be punished after dedicating their whole lives to a discipline and denied their chance to enter both Olympic and national history forevermore? 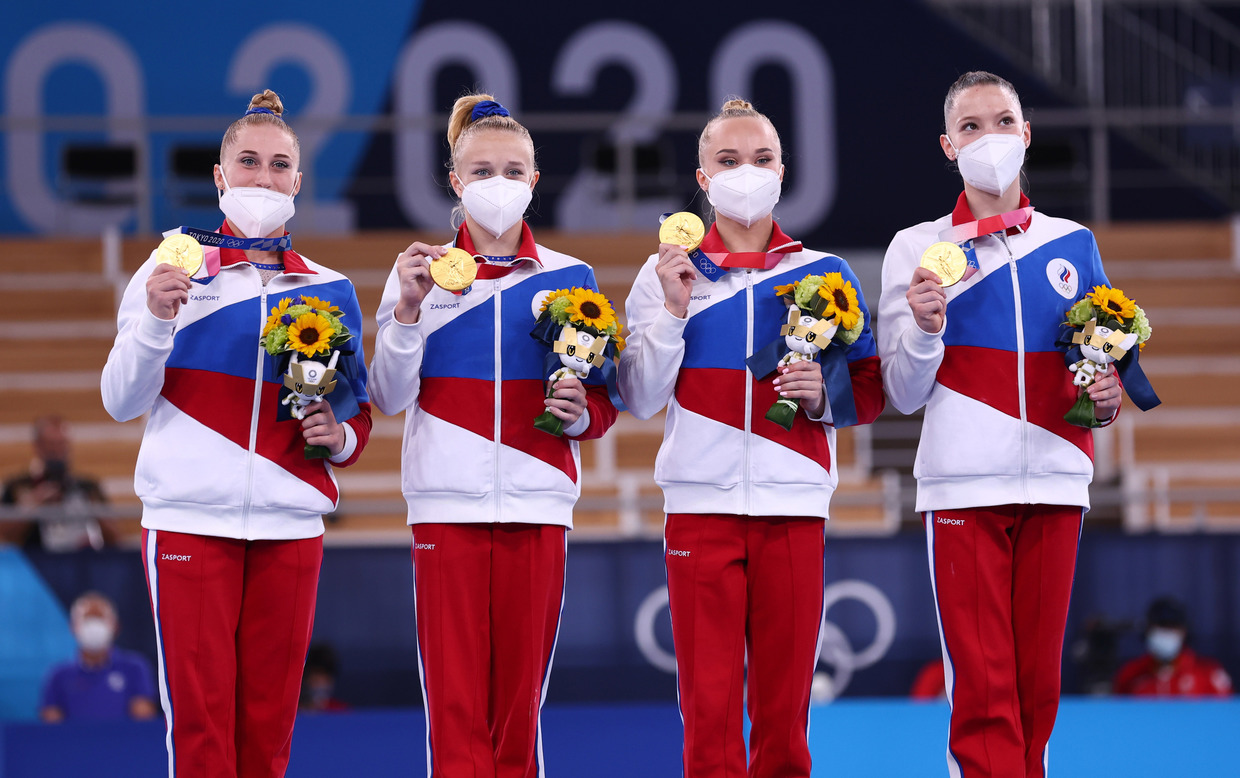 The ROC team – including the women’s gymnastics team – have enjoyed success in Tokyo. © Reuters

There is a strong whiff of double standards, in that when the likes of President Joe Biden is critical of the leadership in the Kremlin, he will still make a point of stating that the US has no problem with the Russian people themselves.

Read more:   Public figures who have tested positive for coronavirus

As far as their athletes are concerned, however, some people want to see leaders and each and every competitor punished for something that happened seven years ago, when swathes of medal hopefuls hadn’t even turned professional or were just starting out.

It’s time to move on. Punishments have been meted out, and the sanctions against Russia are in place – whether you support them or not.

The innocent want to head forward in the fair manner they always have. So let’s allow them to, and enjoy their displays.