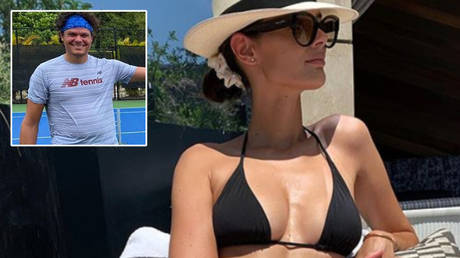 Camille Ringoir, the Belgian model girlfriend of Canadian tennis star Milos Raonic, has hit back at world number 12 Fabio Fognini after the Italian joined in with jokes mocking Raonic’s physique in a photo of him on court.

Raonic had been snapped after a practice session in the Bahamas by Argentine ace Diego Schwartzman, who posted a photo of the 2016 Wimbledon finalist pointing and grinning while appearing to carry a slight belly.

That led to the world No. 13 disabling comments on the post to his Instagram following of almost 450,000, which had seen numerous remarks about Raonic’s possible weight gain during quarantine, including a suggestion by Fognini that he had “eaten a horse”.

Twenty-seven-year-old fashion fanatic Ringoir was unimpressed, firing back at Fognini to remind him that his most recent encounter with Raonic, when he was thrashed 6-1, 6-0 in 2014, had been “just a breadstick and a bagel” – the loss while only scoring one representing a breadstick, with the zero a bagel.

The pair are thought to be pals and have earned millions during their successful tennis careers, although Fognini is still waiting for his first victory over the world No. 30.

When Fognini posted an innocuous photo of himself on a court in Italy, a fan wrote: “Very disappointed in your comment about Milos.

“You guys should be supportive of each other. The issue is that you think that you are to cool for school but Milos will crush you again in the next match. Maybe you will eat another bagel or a pizza.”

Fognini made light of the exchange.

“You know the word ‘mood’ translates as ‘sense of humour’ in Italian?” he asked, adding a kiss to his critic.

Currently on a flight dreaming about warmer places 💭💙

“Check the dictionary and find the explanation. Have a good one.”

“Do you think they get offended that easily? I guess you do.”

Glamorous Ringoir had earlier posted a photo of herself alongside Raonic overlooking the sea with their pet dog.

The cover star has used social media to express her love for Raonic since first being seen with the 29-year-old at a tournament in Australia in June 2019, describing him as “the best person in the world.” (RT)

A total of 27 sarcophagi buried more than 2,500 years ago have been unearthed by…