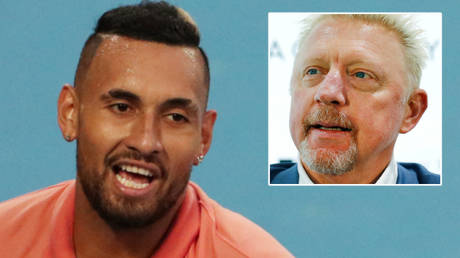 Tennis star Nick Kyrgios and ex-champion Boris Becker’s fierce feud has taken another bizarre twist, with the 25-year-old alleging that Becker wanted to work with him in an attempt to make money before reopening their bitter row.

Kyrgios was riled once again when Becker mocked one of his Instagram posts, in which the Australian provocateur referred to himself with typical bravado as “different breed”, in the latest episode of a row that shows no signs of abating.

Six-time Grand Slam winner Becker, who drew a string of angry reactions from Kyrgios when he accused him of acting unethically by questioning other players over their conduct earlier in the pandemic, told him: “In your dreams.”

Rarely noted for his restraint, Kyrgios volleyed back: “Hating like a little groupie. Lingering around like a bad smell, maybe hoping to get more likes and follows. Unfortunately [he’ll] never be as influential [as me].”

King Boris Becker with the knock-out punch got Nicholas Kyrgios’s drawers in a twist with just one comment 🤣🤣🤣 ! pic.twitter.com/SnNJCcdLfd

He’s gone from wanting to coach me, obviously for his desperate need of a pay check, to hating on my Instagram. Strange world we live in 😂😭🤦🏽♂️

He added on Twitter: “He’s gone from wanting to coach me, obviously for his desperate need of a paycheck, to hating on my Instagram. Strange world we live in.”

Becker, who publicly called Kyrgios a “rat” for his outspoken criticism of the likes of Novak Djokovic following the world number one’s doomed Aria Tour event in June, did not immediately reply to the claims that he had wanted to work with his online adversary.

The 52-year-old did take aim at Kyrgios’s beloved NBA team the Boston Celtics on his Instagram story, where he appeared to call their 112-109 defeat to the Miami Heat on Wednesday “justice”.

Becker added the word next to the Heat logo under the scoreline after an emotionally-charged Eastern Conference finals game, following the announcement that three white Louisville police officers will not be charged with the killing of Breonna Taylor.

Taylor’s death and the ensuing court hearings had been a major point of focus and protest for NBA players during the restart.

I really like you Nick, but let’s be honest, without a coach you’ve not reached the dizzy heights of grand slam titles you may have gotten with a good coach. You’ve made it clear though you don’t have the same passion as Nadal, Federer and Djokovic. Shame really

Come on Nick. You are better than him.No one takes him seriously, not even in his own Country.😂😂😂😂Dont waste your time.

Nick is ranked 42 so doubt he takes himself serious.

Everyone wants to coach you Nick. Because you have talent. But so does literally everyone else between you and number 1. The only thing that sets top players apart is work ethic. The money and lifestyle will be gone by the time you’re 30. What are you going to do then?

Djokovic won 6 Grand Slams under Becker’s Coaching and had an incredible 2015(The greatest season IMO) and first half of 2016.Becker is an amzing coach.Nick on the other hand is just a clown who insults his fellow players on social media while doing absolutely nothing

Former world number one Becker has nowhere near the social media profile of current hopeful Kyrgios, boasting more than 290,000 followers compared to the younger man’s count of more than 1.4 million.

Read more:   Could China switch result in Serie A season for Gareth Bale?

Becker remains a prominent figure in the sport, though, thanks to his evident love of the limelight, frequent media appearances to share his insights and enduring flamboyance – a trait that might have made him feel he could be a good match for the notoriously extrovert Kyrgios.

He also expressed his love for English Premier League side Chelsea following their emphatic cup win on Wednesday, endorsed a tweet by US politician Bernie Sanders calling the ruling on Taylor “a disgrace” and shared a photo of himself with former Brazil player and two-time World Cup winner Cafu.

In a largely critical response to Kyrgios on Twitter, some fans pointed out that Becker had coached Djokovic for three of the most successful seasons of his exceptional career, between 2013 and 2016.

“Let’s be honest, without a coach you’ve not reached the dizzy heights of Grand Slam titles you may have gotten with a good coach,” one reader told the world number 42.

“You’ve made it clear, though, that you don’t have the same passion as [Rafael] Nadal, [Roger] Federer and Djokovic. Shame, really.”

Another referred to Djokovic’s incredible season under Becker’s guidance in 2015, when he won 27 of his 28 matches and captured every Grand Slam title except the French Open.

“Djokovic won six Grand Slams under Becker’s coaching and had an incredible 2015 – the greatest season ever, in my opinion – and first half of 2016,” they pointed out.

“Becker is an amazing coach. Nick, on the other hand, is just a clown who insults his fellow players on social media while doing absolutely nothing.”

Kyrgios has never gone beyond the quarterfinals of a Grand Slam, although he has enjoyed attempting to antagonize Djokovic by regularly making mention of his perfect record in two matches against the Serb great. (RT)

The Armenian media itself revealed thet fact about Armenia’s use of mercenaries. Armenia’s former famous…

We must share the Iron Dome system with our Azerbaijani friends, former Israeli ambassador to…

Provocative actions of ‘Charlie Hebdo’ journal against Islam, the great Prophet of Islam, are an…

The Azerbaijani Defense Ministry has released a video footage of ammunition, armored and auto vehicles…

What do you know about Ganja, victim of Armenian aggression? – VIDEO

Protest against Armenian aggression in Houston

Members of the US Azerbaijani community in Houston, Texas, protested against Armenia’s aggression and held…

Representatives of diplomatic corps leave for Barda and Tartar

Father and local team member, volunteer of IFRC (Europe Office of the International Federation of…

During the day and at nighttime, a large number of enemy forces, 2 – T-72…

The latest situation in the front on October 29