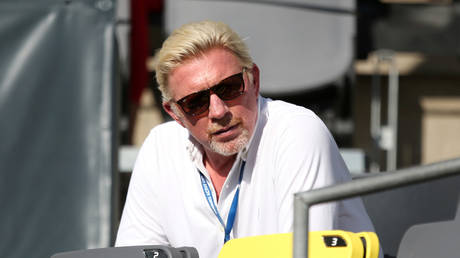 Six-time Grand Slam winner Boris Becker is facing claims that he deliberately concealed trophies and medals he won throughout his career from bankruptcy trustees amid allegations that he is trying to stop them from being sold.

German star Becker, 52, appeared in a London court on Thursday where he faced nearly 30 charges related to hiding silverware from his playing career to stop it being used to settle his debts.

One such medal is understood to be his medal from the 1985 Wimbledon championship which he won at just 17-years-old, a victory which made him the youngest ever male winner of the tournament and marked him out as future superstar.

Becker, who declared bankruptcy in 2017, only spoke at the trial to confirm his name, deny the charges against him and indicate that he understood that he faces arrest if he failed to appear at the trial scheduled for next September.

In addition to his first Wimbledon winner’s medal, Becker is also accused of concealing numerous other trophies and medals, including a 1988 David Cup gold coin, the 1991 and 1996 Australian Open trophies and his 1992 Olympic gold medal.

The charges against Becker also include allegations that he concealed funds from bankruptcy investigators by transferring sums of money to his ex-wife Barbara Becker, from whom he divorced in 2001. He is also accused of transferring more than €100,000 ($118,000 / £90,000) to another former partner, Shirley Becker. They have been separated since 2018.

Furthermore, Becker also faces charges of seven years in jail after being charged last year with withholding information related to an upmarket apartment in London as well as £1.2 million (€1.3 million / $1.5 million).

Among the various charges against him, Becker is also accused of seven charges of concealing property, four counts of omitting bank account statements, two charges of removing property relevant to the receiver, five further count of concealing information related to his estate and one charge of concealing debt.

Becker’s impact on the sport of tennis continues to be felt. He was the first ever unseeded winner at Wimbledon and amassed 49 tournament wins throughout his career. He was inducted into the Tennis Hall of Fame seventeen years ago and, in 2013 he began a three-year stint as Novak Djokovic’s coach – during which time the Serb won six Grand Slam titles. (RT)

President allocates funding for construction of road in Shabran

“Joint tactical exercises with live fire, held in Nakhchivan and the Turkish city of Kars…

Georgia detects about 10 cases of delta plus COVID-19 variant

“Georgia confirmed about 10 cases of delta plus COVID-19 variant in the country,” said Paata…