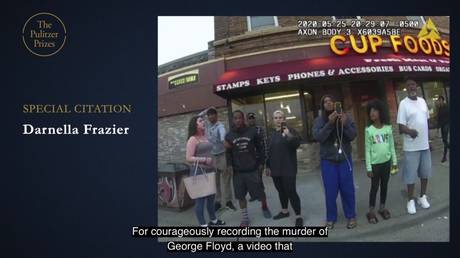 The Pulitzer Prize board has honored Darnella Frazier, whose video of George Floyd’s arrest in Minneapolis launched the Black Lives Matter protests. This year’s prizes remained in the key of mainstream media and identity politics.

Frazier, now 18, was cited for “courageously recording the murder of George Floyd, a video that spurred protests against police brutality around the world, highlighting the crucial role of citizens in journalists’ quest for truth and justice,” at the end of Friday’s ceremony announcing the 2021 Pulitzer Prize winners.

Her video became a key piece of evidence at the trial of former officer Derek Chauvin, convicted in April of murdering Floyd. Frazier also delivered emotional testimony at the trial.

The Pulitzer decision was applauded by, among others, the Minnesota chapter of the American Civil Liberties Union, which called Frazier “brave,” and said her courage had “helped ignite the Reimagine Policing movement.”

Congrats to the @StarTribune for its Pulitzer for powerful and crucial #GeorgeFloyd reporting. A free press matters. How wonderful that the brave @DarnellaFrazier won a special citation! Her courage helped ignite the #ReimaginePolicing movement. https://t.co/VwWKmlhlMf

There were few surprises among the winners of the 105th Pulitzer. Winning entries focused either on the Covid-19 pandemic, the summer of riots, or politics of race. The New York Times won in the Public Service category, for its “courageous, prescient, and sweeping coverage of the coronavirus pandemic that exposed racial and economic inequities, government failures in the US and beyond, and filled a data vacuum,” thereby helping its readers be “better prepared and protected.”

The Explanatory Reporting prize was split between The Atlantic, for a “series of lucid, definitive pieces” that “anticipated the course” of Covid-19 – and Reuters, for an investigation into the qualified immunity of the US police.

The board moved BuzzFeed’s nomination from this category to International Reporting, resulting in the outlet’s first-ever Pulitzer for its coverage of the alleged genocide of Uighurs in China.

BuzzFeed published “a series of clear and compelling stories that used satellite imagery and architectural expertise, as well as interviews with two dozen former prisoners, to identify a vast new infrastructure built by the Chinese government for the mass detention of Muslims,” the Pulitzer judges said.

Read more:   At least 18 killed and over 100 injured in powerful blast in Afghan capital

Literary prizes remained firmly in the land of identity politics as well. Natalie Diaz won the Poetry category with ‘Postcolonial Love Poem’. Louise Erdrich won in the Fiction category for ‘The Night Watchman’, a novel about the plight of Native Americans in the 1950s. The History prize went to ‘Franchise: The Golden Arches in Black America’, by Marcia Chatelain. The General Non-fiction prize went to David Zucchino’s ‘Wilmington’s Lie: The Murderous Coup of 1898 and the Rise of White Supremacy’. Les Payne, founder of the National Association of Black Journalists, who passed away in 2018, and his daughter Tamara won the Biography award for their book ‘The Dead Are Arising: The Life of Malcolm X’.

That did not save the Pulitzers from accusations of racism, however, as the judges inexplicably avoided awarding a prize in the Editorial Cartooning category, of which all three nominees were minorities. (RT)