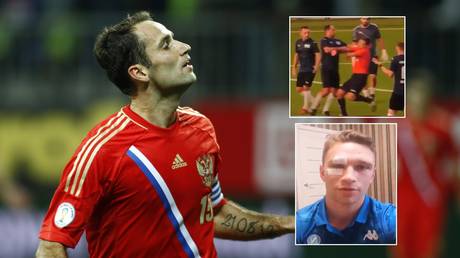 Former Russia captain Roman Shirokov’s sickening attack on an amateur referee was the result of his tough upbringing and the midfielder “could be an MMA fighter,” according to teammate Andrey Tikhonov.

Ex-Zenit St. Petersburg star Shirokov is facing potential criminal action after he lashed out at referee Nikita Danchenko during an amateur game in Moscow earlier this week.

The midfielder, 39, was enraged after being denied a penalty by the official, first insulting him and then threatening to punch him if was handed a red card for his abuse.

When Danchenko sent Shirokov off, the player punched the official to the floor before aiming a kick at his head.

Danchenko was left requiring hospital treatment but later reassured concerned fans on social media that he was fine, having been given stitches around his left eye.

The shocking scenes played out at the ‘Moscow Celebrity Cup’ where Shirokov was representing the Match TV sports channel, where he works as a pundit.

The former Zenit lynchpin has since been suspended from his duties with the channel.

Ex-Spartak Moscow and Russia midfielder Tikhonov was playing alongside Shirokov in the game and also came in for criticism for shouting at a reporter who was filming the incident.

Tikhonov, a fellow pundit at Match TV, has now expressed regret at what unfolded, but claimed it could be put down to Shirokov’s rough upbringing.

“It would be better if this hadn’t happened,” Tikhonov said, according to Sport-Express.

“But Roman could compete in MMA. The guy grew up in an area at a difficult time, a lot of things like this happened then in Dedovsk (Moscow region).

“But I’m not saying that these things should be done on the street, in no case whatsoever. Better in the ring.”

Danchenko has reportedly contacted police over the incident, after spending more than four hours in hospital being assessed.

Shirokov himself issued an apology on Instagram although still appeared unable to let the penalty incident go.

“I would like to express my sincere apologies to (the referee) for such an inappropriate act,” the former footballer wrote.

“I am perfectly aware that not assigning an obvious penalty and then the red card shown cannot be a reason for throwing my hands around, I hope Nikita as soon as possible will return to service.

“I also want to apologize to the organizers of the tournament, my teammates Match TV and viewers.”

Shirokov retired in 2016 having captained Russia during that year’s European Championship clash with Wales. He played 57 times in all for his country, scoring 13 goals. (RT)