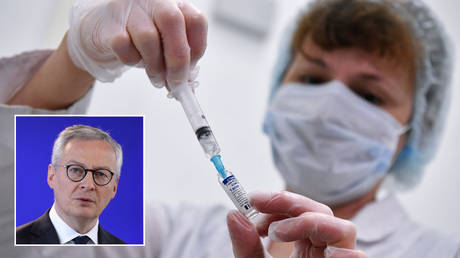 The makers of Russia’s flagship Covid-19 vaccine have hit out at an EU official who they accuse of playing down Sputnik V’s potential to help jumpstart Brussel’s embattled immunization program, if approved by regulators.

In a statement posted on its official Twitter account on Tuesday, the team behind the Russian-made vaccine urged EU Internal Markets Commissioner Thierry Breton to “please stop misleading the public with biased statements against Sputnik V.”

They accused him of using an interview with French daily Le Figaro to claim that, even if the jab were to get the green-light for use by member states, countries would only get supplies by the end of the year. “Sputnik V can deliver to Europe on the day of European Medicines Agency (EMA) approval,” they insisted.

“Sputnik V has already delivered vaccines to Hungary, 40 other nations & can vaccinate 50 million EU citizens starting in June by September 2021,” the developers added. “As a Commissioner of Internal markets you should know this but you refuse any discussion of advanced purchase agreement because of your bias.”

Hungary made waves in Brussels when it decided to move ahead with the use of the vaccine, pioneered by Moscow’s Gamaleya Institute, before the EMA had completed its appraisal of the formula. A domestic row in Slovakia, which led to the resignation of Prime Minister Igor Matovic, was also sparked after 200,000 doses of the Russian vaccine touched down in the country in early March. Matovic argued that he could not turn down the opportunity “to save our people with a quality vaccine only because it’s made in Russia,” but coalition partners slammed Sputnik V as a tool in the Kremlin’s “hybrid war” and branded the departing leader “Putin’s sidekick.” (RT)