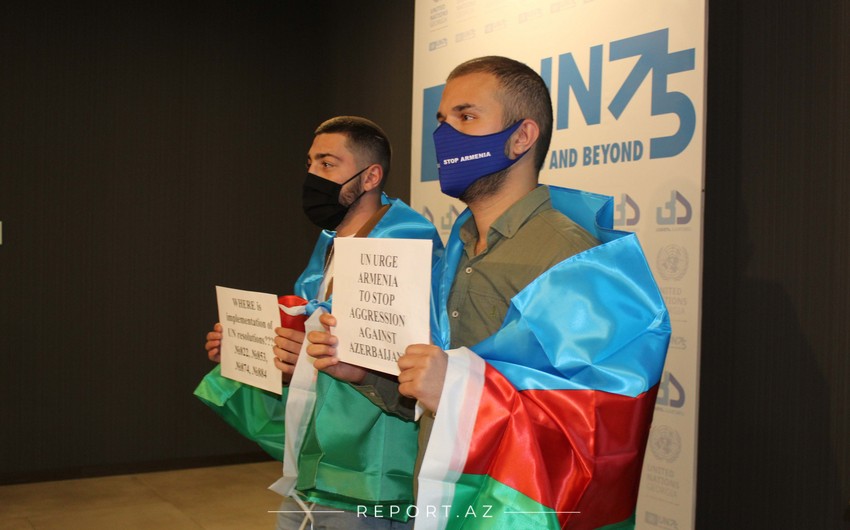 Azerbaijani youth protested against the non-implementation of UN resolutions on the Nagorno-Karabakh conflict in Tbilisi.

Local bureau of Report informs, two young men, Namig Asgarov and Namig Ahmadov entered the conference hall of the event dedicated to the 75th anniversary of the United Nations.

With Azerbaijani flag on their shoulders, they held placards saying “Are UN resolutions just pieces of paper?”, “UN, force Armenia to end its occupation policy against Azerbaijan!”.

Correspondents of the leading Georgian TV channels covering the UN event were interested in the action’s purpose. Azerbaijani youth said that Armenia had not implemented four UN resolutions on the conflict for nearly 30 years. They noted that Azerbaijan has been restoring its territorial integrity within the international law framework since September 27, and the world community must protest against Armenia’s policy of aggression and terrorism.

Notably, N. Ahmadov is from the Jabrayil region of Azerbaijan that was recently liberated from occupation. He is studying in Tbilisi.

19:00 Group of Azerbaijani servicemen honored with medal “For military services”

18:26 John McAfee’s lawyer says anti-virus tycoon showed no indication he would take his own life

18:26 Armenian Armed Forces fire at positions of Azerbaijan in direction of Tovuz