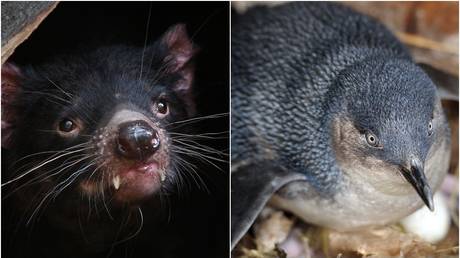 Australia’s endangered Tasmanian devils have eliminated a local colony of penguins and decimated other bird fauna after they were brought to Maria Island in a bid to save them from extinction due to animal cancer.

According to The Australian newspaper, the devils were introduced to the tiny island off Tasmania’s east coast in 2012 as an “insurance population” due to the fears that a raging facial tumor disease would make the raccoon-sized creatures disappear completely.

The arrival of the world’s largest surviving carnivorous marsupials took a horrible toll on the island’s bird colony, as the initial group of 28 devils on Maria grew to 100 in just a few years.

BirdLife Tasmania conservation group said that in 2010-2011 there were around 3,000 breeding pairs of little penguins, the Earth’s smallest species of penguins that are native to Australia and New Zealand, living across the national-park island.

Park officials “went out 18 months back and couldn’t find a single penguin breeding in any of the previously known penguin colonies on the island,” the group’s convener Eric Whoehler said.

“So, the devils have wiped out the penguins. It’s 100%,” Whoehler said, adding that Maria’s Cape Barren geese and native hens have also suffered from the carnivores. (RT)