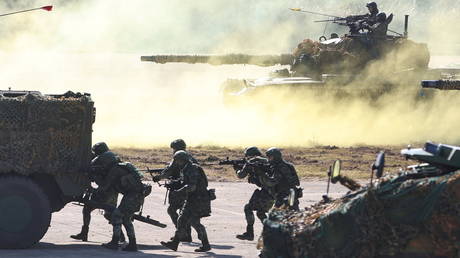 Taiwan’s president Tsai Ing-wen said she had faith the Biden administration would ride to Taipei’s defense in case of an attack from the mainland, and even confirmed US troops had a presence on the island, albeit a small one.

“I do have faith” that the US would help defend Taiwan, Tsai told CNN in an exclusive interview aired Wednesday evening, pointing to the “wide range of cooperation with the US aiming at increasing our defense capability.”

@CNN#exclusive interview with Taiwan President Tsai Ing-wen: threat from China increasing ‘every day,’ confirms for the first time the presence of US troops on Taiwanese soil, ‘has faith’ US would come to Taiwan’s defense if attacked & is open to talks with China. @EricCheungwcpic.twitter.com/r9MRKFMCvd

There are US troops on the island, though “not as many as people thought,” Tsai added. According to CNN, the Pentagon has confirmed the presence of 32 military personnel in Taiwan, up from 10 in 2018. The network wasn’t clear whether this was due to an increase in the number of Marines guarding the de facto US embassy in Taipei, or if they were military advisers that came as part of some $5 billion worth of weapons contracts, however.

Read more:   Month of Muharram to begin on September 11

Tsai’s comments appear to reflect Taipei’s perception of what happened in the US last week, when President Joe Biden said at a public event that Washington would come to Taiwan’s aid, only for the White House to walk back those comments the very next day.

Also on rt.com ‘No change’ in US policy on Taiwan, White House says after Biden vows to defend it against China

“Can you vow to protect Taiwan?” Biden was asked at a CNN town hall, to which he answered “Yes,” going on to say the US had “the most powerful military in the history of the world.”

Asked by host Anderson Cooper if this meant the US would come to Taiwan’s defense if China were to attack, Biden said “Yes, we have a commitment to do that.”

Biden’s promise of support was even more surprising given the manner of the US exit from Afghanistan at the end of August. The Afghan government built and financed by American taxpayers over 20 years had imploded without much of a fight, surrendering to the Taliban even before the US troops were out of the country. (RT)